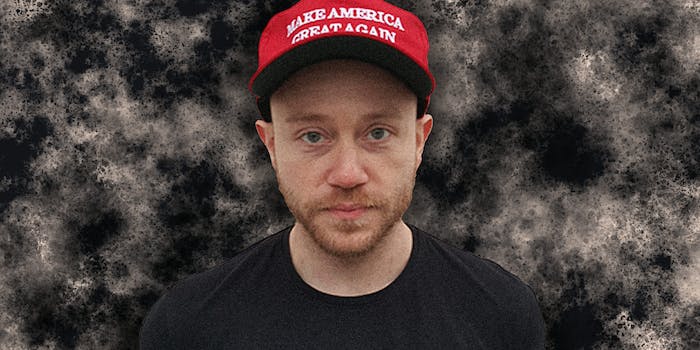 The neo-Nazi has evaded lawyers and a private investigation firm.

Andrew Anglin, creator of neo-Nazi website Daily Stormer, has been hiding from lawyers for six months—but now a legal team representing a Muslim comedian wants to question his family members and request documents from banks in order to serve Anglin with their defamation lawsuit.

Anglin is being sued by Dean Obeidallah, a SiriusXM Satellite Radio host who says Anglin framed him as the culprit of a fatal bombing attack in Manchester, England in May. Investigators said Salman Abedi, a suicide bomber, was behind the attack after an Ariana Grande concert that left 22 victims dead.

However, lawyers for Obeidallah say they have been unable to find Anglin, even after Obeidallah paid almost $1,000 to a private investigation firm with 28 years of experience in Anglin’s home state of Ohio.

In a new court filing, Obeidallah’s lawyers have taken their most aggressive steps yet to find and serve Anglin, including asking for permission to subpoena depositions and documents from Anglin’s father, Greg, and his brother, Mitchell. They also want to subpoena documents from entities Anglin has used to operate Daily Stormer, including banks, web hosts, domain registrars, internet service providers, telephone companies, and landlords.

Obeidallah’s lawyers said they also wish to subpoena documents from the United States Post Office and other “particular government entities” in order to find and serve Anglin, who they claim lives in or near Worthington, Ohio.

“More than two months after the complaint in this action was filed, defendant Andrew B. Anglin continues to elude service of process, all the while publicly acknowledging—and mocking—this lawsuit,” the filing said, pointing to Anglin’s description of the lawsuit as a “lolsuit” in a post on Gab.ai. Since April, Anglin has also evaded service for a lawsuit brought by a Jewish woman, Tanya Gersh, who claims he launched a “troll storm” against her, as the Daily Dot reported.

The filing added: “Defendant Anglin also cannot be located through his employment because, based on currently known information, Mr. Anglin has never held any gainful employment. Defendant Anglin is not married, but he has a girlfriend based on defendant Anglin’s recent post on the social media site, [Gab.ai].”

Lawyers for Gersh served Anglin notice in an Ohio newspaper, which is an alternative to serving him in person. One of Obeidallah’s lawyers, Sirine Shebaya from Muslim Advocates, explained to the Daily Dot why she believes subpoenas will be more effective.

“Based on [Anglin’s] public comments, he is clearly already on notice about this litigation, and we’d like to be able to formally serve him and ensure he has to show up in court to answer for his actions,” she said.

The Daily Dot contacted Andrew Anglin via an email address listed on his website, and his active account on Gab.ai, but he did not immediately respond to our requests for comment.