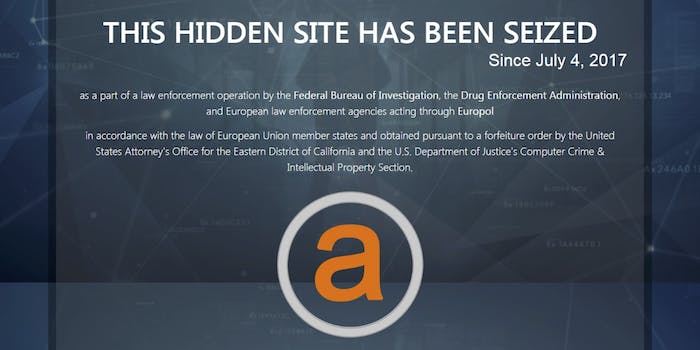 Alexandre Cazes was allegedly a member of RooshV.

The man suspected of running one of the largest illegal online markets in internet history has been identified—in part because of his activities on a notorious men’s rights forum.

Alexandre Cazes, 26, was arrested earlier this month in Bangkok, Thailand, at the request of American law enforcement on the grounds that he was operating AlphaBay, a major marketplace for illicit goods on the dark web. Cazes took his own life in jail on July 12, authorities said.

On Thursday, the Department of Justice (DOJ) and its international partners announced law enforcement agents had shut down AlphaBay and another illicit market, Hansa.

As part of the court filings, the DOJ explained how investigators identified Cazes despite AlphaBay’s use of encryption to mask communications and other technical details that could reveal a user or administrator’s identity. Investigators discovered Cazes used the personal email address [email protected] That email address, along with other email addresses associated with Cazes, was included in the header information in the AlphaBay welcome email as well as for users who submitted their email addresses for password recovery.

Those in the cybersecurity community, including hacker Lauri Love, denounced Cazes as careless with his security.

According to Daryush Valizadeh—the Roosh V of the Roosh V forum—Cazes was a member of the site. Valizadeh said in a post to the Roosh V community that he was unaware that Cazes was under investigation but that he maintains the policy to abide by valid law enforcement demands.

“When you participate on the forum, it is expected that you follow all Federal, state, and local laws, as stated in the registration terms,” Valizadeh writes, adding: “While it’s rare for me to take action against a member for his offline activities, understand that if you happen to be a drug lord or high-level criminal, your association with the forum may cause harm to it or its members. If I am told that you are participating in felonious crime, you will be banned from the forum.”

Users responding to Valizadeh’s post answered with a wide range of reactions, from “we’re being watched” to thanking the site’s founder for keeping them informed.

The tale serves as yet another reminder that what happens online is, in many ways, forever—and you never know who’s on the other side of the screen.

Correction: Cazes was only a member of Roosh V. We regret the error.