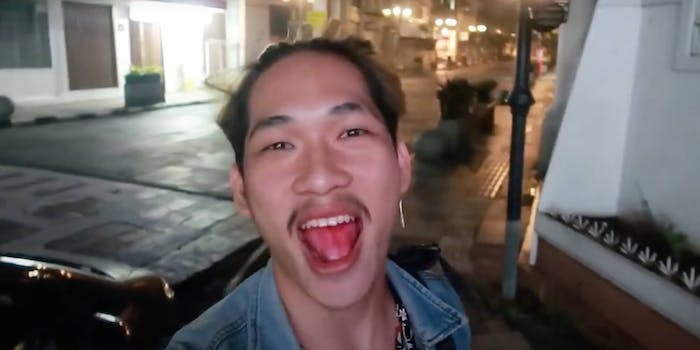 The YouTuber faces up to 12 years in prison.

Last week, Ferdian Paleka uploaded a video in which he and a friend claimed to be handing out instant noodle boxes to people whom they called “bencong,” an Indonesian slur for transgender women. The boxes actually contained bricks, rotten vegetables, and garbage.

According to Newsweek, Paleka and his cohorts face up to 12 years in prison and a potential $804,000 fine.

The West Java police apprehended Paleka on Friday, according to local media reports. One of the friends involved in the video, Tubagus Fahddinar, reportedly handed himself over to the Bandung police.

Newsweek reports that Paleka used transphobic slurs throughout the video, saying, “If there are any bencong, we’ll give them the boxes, but if they’re not around, that means this city is safe from waria.” (Waria is another Indonesian slang term combining the words for man and woman.)

The video gained national notoriety after many members of the LGBTQ community took to social media to express their anger; many called on the public to report Paleka’s video.

Several victims of the prank reported Paleka and his friends to the police.

One of those targeted says she “did not expect anyone to be reckless during the month of Ramadan and the atmosphere of the COVID-19 pandemic.”

Another victim, named Dini, said, “[We were] treated like trash.”

“We hoped to get noodles, but it turned out they were [a brick of garbage],” she added. “I feel hurt and humiliated.”

YouTube removed the video from its platform, claiming it violates the site’s policy on harassment and bullying. But Paleka seemed to express little remorse, posting a fake apology to Instagram. He reportedly says he would turn himself in if he got 30,000 more followers first.