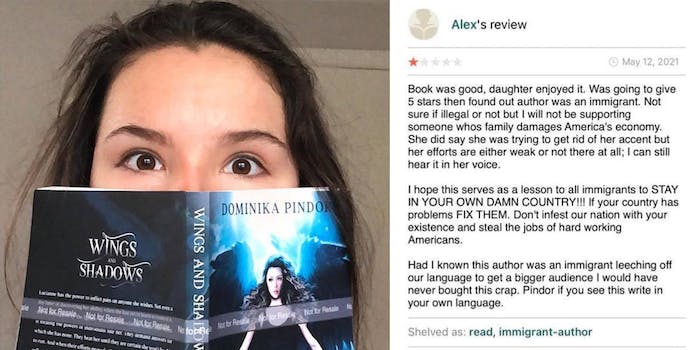 ‘Was going to give 5 stars then found out author was an immigrant’: Xenophobic male Karen supposedly leaves viral book review

The hateful review went viral. But is it real?

Teenaged YA fiction novelist Dominika Pindor recently revealed that a xenophobic male Karen gave her book, Wings and Shadows, a one-star rating when he found out she was an immigrant. It also turns out there’s much more to the poor review.

The post/tweet is a screenshot of a wildly xenophobic and generally unusual GoodReads review of the book:

“Book was good, daughter enjoyed it,” the man starts. “Was going to give 5 stars then found out author was an immigrant. Not sure if illegal or not but I will not be supporting someone whos family damages America’s economy. She did say she was trying to get rid of her accent but her efforts are either weak or not there at all; I can still hear it in her voice.

I hope this serves a lesson to all immigrants to STAY IN YOUR OWN DAMN COUNTRY!!! If your country has problems FIX THEM. Don’t infest our nation with your existence and steal jobs or hard working Americans.

Had I know the author was an immigrant leeching off our language to get a bigger audience I would have never bought this crap. Pindor if you see this write in your own language.”

After Pindor tweeted the review, she later provided updates, which appear to suggest the reviewer made contact with her but wound up blocked.

In subsequent tweets, it seems evident it was a case of a flirty male Karen failing to shoot his shot correctly and then getting wildly aggressive when she made it clear she wasn’t interested.

Pindor said she deleted the original tweet, as she believed the issue to be resolved. But apparently, people have gone onto the book’s GoodReads page to challenge her story and accuse her of lying, directly questioning if the reviewer was a real person… and whether she was actually an immigrant.

Further, numerous new “reviews” claimed the entire situation is a scam by Pindor for clout and to gain more readers of her book.

Pindor denied running a hoax in an interview with Newsweek.

However, either GoodReads or the alleged author has since taken down the review.

Curiously, though, in a recent update, she says that “Pete and I are friendly again, so here’s proof that he’s not a threat anymore. We’re back to having normal conversations as friends.”