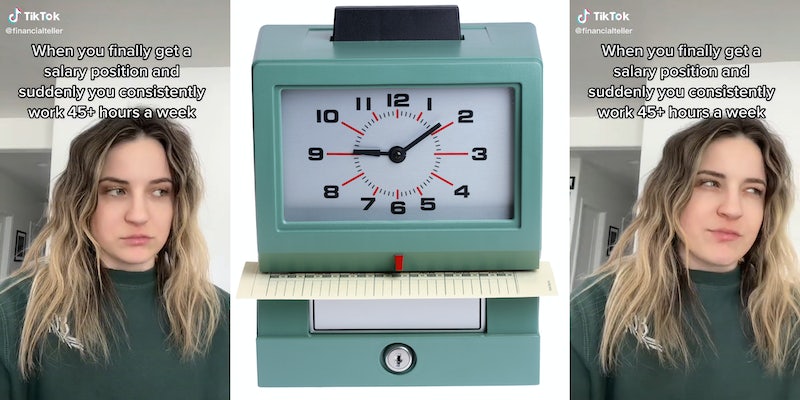 In the United States, most salaried employees have schedules set to work 40 hours a week, corresponding with five eight-hour days.

While this is considered “full-time,” it turns out that many Americans are putting in some extra—sometimes unpaid—hours. In a 2014 poll from Gallup, American reported “working an average of 47 hours per week, almost a full workday longer than what a standard five-day, 9-to-5 schedule entails.”

For newly salaried employees who may have thought their salaried status would free them from the stresses of hourly work, these figures may come as a shock—at least, they certainly did for TikToker @financialteller.

In a video with over 100,000 views, @financialteller wrote, “When you finally get a salary position and suddenly you consistently work 45+ hours a week.”

In the comments section, many users related to @financialteller’s statement.

“I never stayed late or came in on a weekend before I worked salary and I am so mad at myself for it,” another added.

“I made more money at my hourly job for less hours than I do at my salary job thanks to no OT,” alleged a third.

“Salary blows. I am looking to get an hourly career so I am no longer used and abused,” contributed a fourth.

@financialteller noted in comments that she would love to simply clock out when she’s supposed to, but doing so would “require my team to be left to suffer alone. And I’m a leader not a manager.”

She also says she asked for more staff to cover their needs, but they “were told we don’t ‘warrant’ it.”

The Daily Dot reached out to @financialteller via TikTok comment.