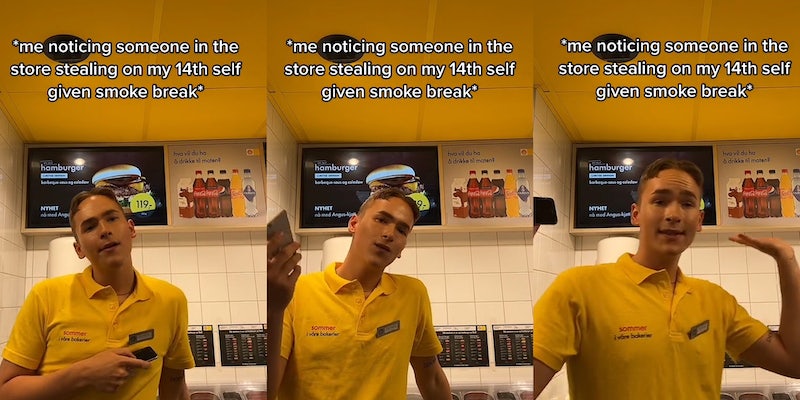 'I'm not the cops baby i jus work here.'

In a viral TikTok, a convenience store worker said they don’t chase after customers who steal when they are on a break, sparking controversy over the safety of workers stopping shoplifters and corporate expectations of minimum wage workers.

The viral video, which has over 479,600 views and was posted by TikToker Petter (@stresseddepressed01), shows the worker walking around his job in uniform pretending to see someone stealing and letting them go.

“Me noticing someone in the store stealing on my 14th self given smoke break,” the TikToker wrote in text over the video.

“If you want it, take it,” a song plays in the background.

“Thats on working minimum wage,” the TikToker captioned the video.

Viewers debated whether low-paid retail workers should be expected to confront shoplifters.

“I’m not chasing anyone for 12 an hour are you fr,” one user commented.

“Im not the cops baby i jus work here,” another argued.

Many users said they refuse to stop people from stealing for minimum wages. “What am I gonna put my life on the line for my 11 an hour?” one questioned.

“You really shouldn’t risk your safety to stop them. You rlly don’t know what ppl are capable of,” another used urged.

Others said they don’t care if people steal from big companies. “If you see someone stealing from a big company, no you didn’t,” one said.

Others encouraged the worker to keep on taking breaks and avoid overworking.

In general, it is standard for retail stores to discourage employees from stopping shoplifters in stores due to safety concerns.

In fact, many stores—including Walmart, Dollar General, and Kroger—have allegedly fired employees for going against policies instructing workers to not confront shoplifters. As previously reported by the Daily Dot, in a viral TikTok posted in 2021, a Best Buy employee claimed they were fired after physically taking down a shoplifter.