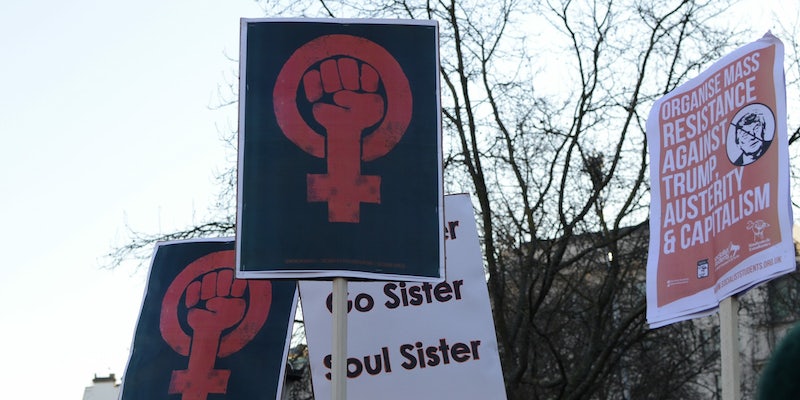 It all boils down to inclusivity.

Perhaps you have lately seen the words “womxn” and “womyn” emblazoned across a chest at, say, the Women’s March and wondered, “What do these creative spellings mean?” Or perhaps you’ve seen that shirt that lists three different takes on the word “women” and smiled to yourself at the innovative interpretation, without reading too much into the “x” replacing the traditional “e.” Well gather ‘round—here are your study materials, condensed.

One common misconception about feminists is that they hate men. Full stop, no exceptions, they hate each and every one. For some people, this is probably true and they likely have their reasons. Feminism, however, means nothing more nor less than the advocacy of gender equality. Among certain feminists, then, it rankles that our socially assigned gender signifier remains bound—or even subordinate—to “man” and “men.” As HelloFlo explains, swapping out the “e” helps sever ties to the patriarchy. As the Womyn’s Centre puts it:

The word “woman” refers to “of man” implying that a woman’s identity is inherently reliant on man…In spelling womyn with a “Y,” we recognize that womyn have diverse and different identities and roles which are not all defined by a relationship to men (or dictionaries!).

Why the “x” variation, then? In a word, the answer is inclusivity. But let’s really get into it.

Womyn and Womxn: What’s the difference?

Although they technically serve the same basic purpose, womyn and womxn come with different connotations. Womyn is associated more with the often white, cisgender sector of the feminist movement, while womxn denotes gender fluidity and inclusivity.

According to the Boston Globe, the word “womyn” traces back to a 1975 issue of Lesbian Connection magazine that announced the Wolf Creek Womyn’s Festival, or today’s WoLF Fest, the radical feminist festival. Among its principles, the Women’s Liberation Front proclaims, “We are a women-only organization: We are females who survived girlhood.” Which is to say that transgender women aren’t welcome within WoLF Fest’s ranks.

Womyn is a term often tied to the vein of feminism that does not view trans women as women because they were not born with female genitalia. The term is not infrequently associated with another you may have seen: TERF, a trans-exclusionary radical feminist.

You’ve probably seen terms like “Latinx” floating around in recent years. As the Globe explains, the x communicates that the person identifies neither as a man, or Latin, nor as a woman, or Latina. Instead, the x allows space for individuals who identify as genderfluid, genderqueer, gender non-conforming, or non-binary. The “x” in womxn works the same way, and as such, opens up the free-human-woman concept to include trans women.

How do I pronounce “womyn” and “womxn”?

The former is pretty self-explanatory, maybe sounding closer to “womin” than “women” when said out loud. As to the latter, it’s unclear, but as Nita Harker—an assistant professor of sociology at Whatcom Community College in Washington and a co-organizer of the Seattle Womxn’s March—told the Globe, that element of mystery only strengthens the word’s meaning.

“I actually think the challenge—particularly that it is hard to pronounce in your mind as you read it, that it forces one to stop and think, that it is not just easy and nice and recognizable—is part of the point and the draw,” Harker explained. “To me, it represents the complexity of gender.” And when you confront the word “womxn,” you have to confront that complexity and what it means.

If we already have “womyn” and “womxn,” what’s all this “wimmin” business?

“Wimmin,” or “womin,” accomplishes the same thing as “womyn” and “womxn.” This time, it’s apparently without the problematic, TERF-y implications of “womyn.” The Globe points out that “wimmin” is occasionally associated with the written depiction of “folksy speech patterns,” as when Grumpy the Dwarf dismissively deploys “wimmin” in a 1938 version of Snow White and the Seven Dwarves. “Didn’t I tell you? She’s crazy. Wimmin! Pah!”

But probably no one will remember that antiquated usage if you say “wimmin” now, in gender-non-specific reference to your feminist coven. That said, it’s also possible that no one will know what you’re talking about regardless. Womyn and womxn aren’t widely used terms or even acknowledged in the dictionary, although one day that may change.