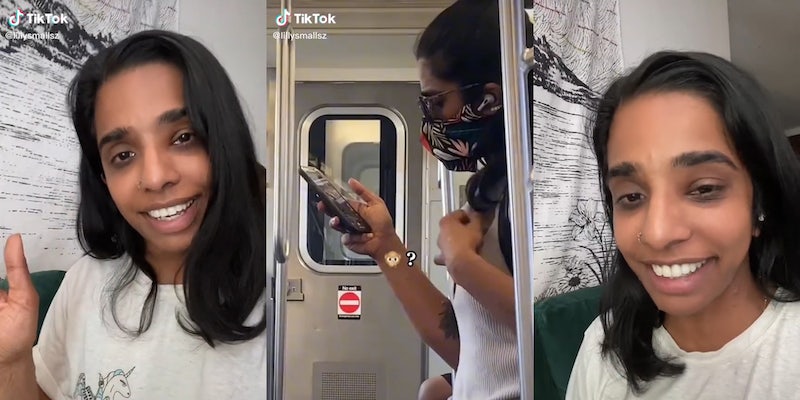 ‘I’m the girl from the video’: Woman with skin condition speaks out after stranger films her on train, speculates she has monkeypox (updated)

‘I have taken screenshots of the comments [and] will be posting them…everyywhereee.’

A stranger posted a TikTok of a woman sitting on the New York City subway, showing small bumps on her legs and speculating that she has monkeypox. The woman posted a TikTok of her own to share she has a rare skin condition and has dealt with stigma related to it all her life.

Lilly Simon (@lillysmallsz) posted a TikTok on Aug. 1 that stitched a video from @fuckinfrass, showing her sitting on the train. In the video’s overlay text, @fuckinfrass put a monkey emoji with a question mark, seeming to imply that Simon has monkeypox, a virus that is currently surging in the U.S. and New York City. Their video was viewed 2.4 million times.

In Simon’s video, she explains that she has NF1, or neurofibromatosis type 1, which causes benign tumors to form along her nerves, showing on her skin. Simon says that her condition causes many health complications and that she’s been in therapy to deal with the stigma she has faced with regard to the appearance of her condition.

“I will not let any of y’all reverse years of healing and therapy that I had to endure to deal with the condition and, of course, to exist around people like you,” Simon says in the video, speaking to @fuckinfrass and those who left mean comment on their video. “I’ve come a long way, and I like me.”

That said, Simon says that she’s not above being vengeful. In her TikTok’s comment section, she said that she screenshotted the comments that she felt harassed by on @fuckinfrass’s video and plans to post them. “When someone does a background search/google search on yall… theyll see who you really are,” she said in the caption.

@lillysmallsz #stitch with @fuckinfrass i have taken screen shots of the comments will be posting them…everyywhereee. For those of you who were kind thank u. Youre fine. When someone does a background search/google search on yall… theyll see who you really are.do you talk to your colleagues like this? Your patrons?#nf1warrior💚💙 #nf1awareness #nf1fighter #bodyshaming #bodypositivity #streetharrassment ♬ Oh No – Kreepa

Though Simon turned comments off on her viral video, folks who also have NF1 left comments for her on her other TikTok videos.

“I have NF1 also and get so many mean looks at my bumps,” @jameeclark7 commented.

“So glad you said something to those assholes! I too have NF,” @destinyraynette wrote.

“I want to tell you I also have neurofibromatosis (nf1),” @saturnsons commented.

“I’m really sorry I hat happened to you,” @reyushbp wrote. “My heart goes to you.”

“People can be so cruel and social media brings out the worst in them,” @cookiegonif commented.

“You don’t gave to explain yourself to no damn body,” @julenedraytonmo wrote. “Hold on to your beauty.”

Update 9:10am CT, Aug. 3: In a phone interview with the Daily Dot, Simon said that when she first saw @fuckinfrass’s video of her, she was dumbfounded and her “heart dropped.”

“It felt like I was underwater,” Simon said. “How do you respond when you see someone doing something terrible to [you]?”

Simon explained that she made a TikTok in response to the viral video because she didn’t want people to feel bad for her. Plus, she responded to many of the cruel comments about her left under @fuckinfrass’s video.

Growing up with NF1, Simon said that she felt very isolated. Comments on her video and messages she’s received from people with the condition made her feel seen.

The Daily Dot reached out to @fuckinfrass via TikTok comment.