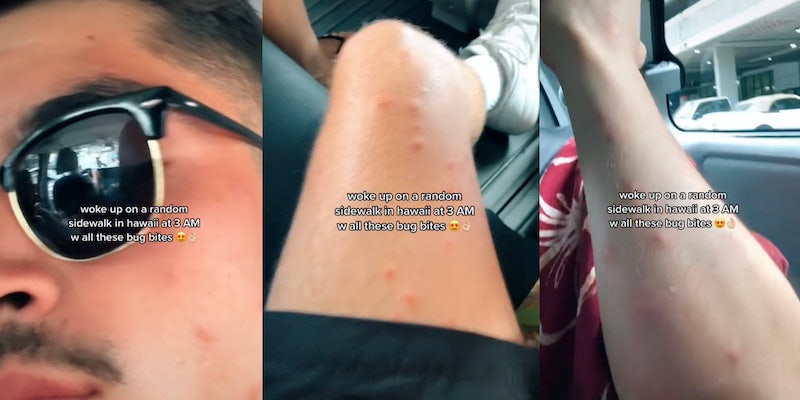 ‘Who is gonna tell him?’: TikToker says he woke up in Hawaii with ‘bug bites’—people think he has monkeypox

A TikToker says that after sleeping on the ground in Hawaii, he woke up with bug bites all over his body. Viewers think he has monkeypox.

Francisco Almaraz (@franciscoalmaraz_) posted a TikTok claiming he “woke up on a random sidewalk” while in Hawaii with bug bites on his legs, arms, hands, and face. The bumps on Almaraz’s body are pink, raised, and resemble large mosquito bites.

On Wednesday, Almaraz’s TikTok had over 1.5 million views.

Commenters on the video warned the TikToker that they thought he might have monkeypox.

Almaraz’s TikTok—posted on July 16—slightly coincides with monkeypox being declared a national emergency by the World Health Organization on July 23. Symptoms include a rash that can take the form of pimple or blister-like sores. As of July 22, there were, according to Hawaii’s department of health, only 11 confirmed cases of monkeypox in Hawaii. To confirm a monkeypox case, healthcare providers are testing people who have symptoms.

In a follow-up video posted on July 26, Almaraz says he does not have monkeypox. He says that he thinks he was bitten by sand fleas, which are also known as sand crabs. Sand fleas are known to burrow beneath the sand during the day, and come up to the surface at night.

In a Twitter direct message to the Daily Dot, Almaraz said he has not been tested for monkeypox because the bumps on his skin are “already going away.”

Almaraz also says in his follow-up video that no one he had contact with experienced the same bumps that he did.

“I honestly still don’t know what it was,” Almaraz says in his follow-up TikToks. “I just woke up behind a bar and I was like ‘What the fuck is this on me?'”

The Daily Dot has reached out to Almaraz via Twitter direct message.