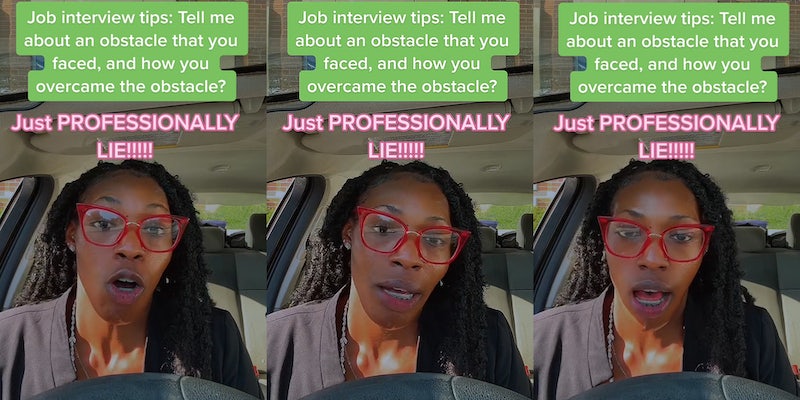 ‘Just lie’: Life coach shares why you should lie when asked this question in a job interview, sparking debate

'I come up with a new story on the spot every time.'

A woman went viral on TikTok after encouraging people to lie about a certain question during a job interview.

User Tashe Gray (@tashe_gray) typically posts content about giving life advice, ranging from exercise and mental health to jobs and careers. During a 30-second clip posted on Aug. 29, she offers a word of advice to her job candidates: lie when it comes to a certain question.

Gray revealed the interview question is revealed in the text overlay: “job interview tips: tell me about an obstacle that you faced and how you overcame the obstacle?”

“When an employer asks, ‘what’s an obstacle you have faced and what you did to overcome it?’ You could tell the truth or you could just lie,” Gray says, starting off the video.

Gray emphasizes that you should “just lie” because “there’s no way for them to verify the story at all.” She provides tips on how to make the lie believable starting with making the lie “as juicy as possible” and that it has to be interesting.

The second tip is to “speak clearly” and “don’t stumble” because “you’re going to need to know the words that you’re going to speak before you speak them.”

The video amassed 1.3 million views as of Sunday, with many agreeing with what Gray said and offering their own examples of using this method.

“I ALWAYS LIE!! Girl I write down EVERYTHING like a damn movie script study it & do a lil freestyle on the spot but the same story line,” one commented.

“STAR METHOD LIE AND MAKE SURE YOU ARE THE HERO AT THE END,” a second agreed.

“I come up with a new story on the spot every time and I be amazed how that lie just be flowing,” a third stated.

“I just think of a random pointless situation and most of the time it’s definitely fabricated,” another said.

Other viewers, however, criticized Gray for this, stating it’s best to be honest during an interview.

“I usually tell the truth and I tell the same story at every interview lol bc I’ve only ever been faced with one or two obstacles that I’ve let slide,” one person shared.

“How about telling the truth? Being authentic and transparent goes a long way,” a second argued.

“No need to lie. Just think of a time you didn’t know how to do something and the steps you took to learn it, discipline you needed, resources you needed, and a positive outcome. It can be life scenario if they don’t specify work obstacle,” another stated.