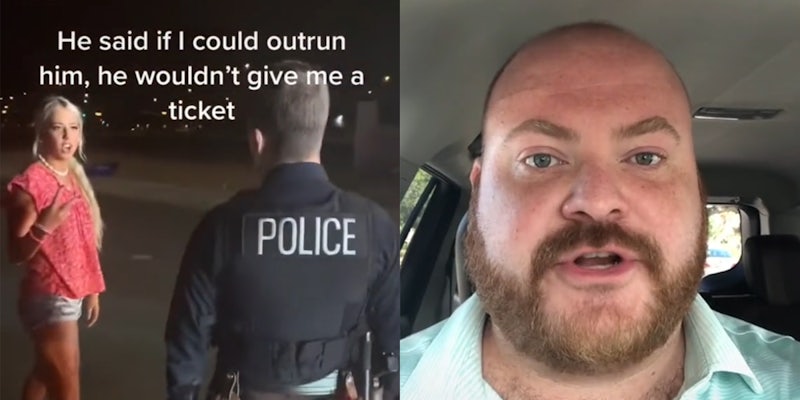 ‘I wish Sandra Bland was given the opportunity to race’: White TikToker gets out of ticket by racing a cop, sparking debate

'You know why race is being brought into this.'

In a viral TikTok video, a white TikToker apparently got out of a traffic ticket by racing a cop in a foot race. The controversial video sparked tremendous debate, recalling the deaths of Sandra Bland and Tamir Rice.

The video was posted by @tanasmith21 and has been viewed over 12.8 million times and liked over 1.3 million times. It shows the popular TikToker, who boasts over 72,000 followers, briefly in a racing pose, with the attending officer behind her. She suddenly takes off with the cop trailing. The caption on the viral video reads: “He said if I could outrun him, he wouldn’t give me a speeding ticket.”

It ends with the text overlay: “No ticket for Tana.”

A debate was sparked in the comments section of the video, with many viewers pointing to the TikToker’s white privilege. Others didn’t see an issue with the video, and many called those viewers out. “Everybody in the comments who doesn’t see the problem with this video then evidently you’re the problem,” one said.

“To all the white people, and all the Latinos, in the comments section, going ‘Why does race have to be brought into everything?’ You know why race is being brought into this. That this white girl gets to run, to see if she gets a ticket, and yet Black parents have to teach their children to keep their hands on the [steering] wheel and ‘You need to be afraid for your life’? We all know I’m done with playing these games,” @ryryalt continued.

“If you left those messages, you’re a racist, period, point-blank; we’re done having this conversation.”

The comments people are leaving on @ryryalt’s video are powerful. One woman, a Black mother, said the video “made me cry. My son is 24 and purchasing his first home and I am so scared of him not being under my protection. I wish it was a game but it’s not.”

The Daily Dot has reached out to @ryryalt and @tanasmith21.