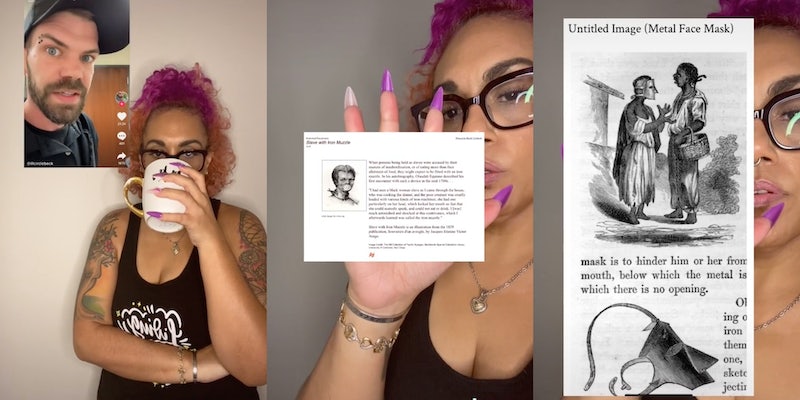 'You have all of the PWC nerve and gall to compare that to a mask that you can remove during the middle of a goddamn pandemic?'

A white man on TikTok tried to compare face masks—the ones people wear to protect themselves against COVID-19 —to the muzzles that slaves were forced to wear as punishment.

Although the original video appears to be deleted now, a Black TikToker explained why the man’s theory was an inaccurate and insensitive comparison. Her TikTok has received over 424,000 views and 146,000 likes.

The woman appears to have two TikTok accounts, @_sunny_laluz and @pharaoh_nefertiti, and goes by Sunny. She starts her video by showing a clip of the man speaking.

“Did you know that in the 1800s when slaves would misbehave, slave owners would put cloths over their face and make them go work in the hot fields til they passed out?” the man said. “So don’t forget to put on your mask before you go to work like a good little slave of the government.”

“You mean the metal muzzles that they would use?” she asked. “You mean the ones that would cover their entire face where they could barely talk much less eat? They most certainly could not remove them.”

Sunny said the metal muzzles, which were used as a form of punishment, were padlocked onto slaves’ faces. Black slaves would starve so badly that they’d eat dirt, and while forced to wear the muzzles, they couldn’t even do that.

According to the PBS Resource Bank, when slaves were accused by their masters of insubordination or of eating “more than their allotment of food,” they would often be fitted with an iron muzzle.

“So slave masters would put that on them as a form of punishment that they couldn’t take off, and you have all of the PWC nerve and gall to compare that to a mask that you can remove during the middle of a goddamn pandemic?” Sunny said, addressing the white man. “Keep Black people out of your fucked up narrative.”

TikTok viewers were just as disgusted at the comparison, saying the oppression of Black slaves has nothing to do with wearing a face mask for the medical safety of an entire society.

“Y’all ever notice how groups who are actually oppressed never have to compare themselves to anyone else? Just me?” one viewer commented.

Another viewer said, “I don’t understand being jealous of oppression… there has to be some kind of brain injury involved with these people.”