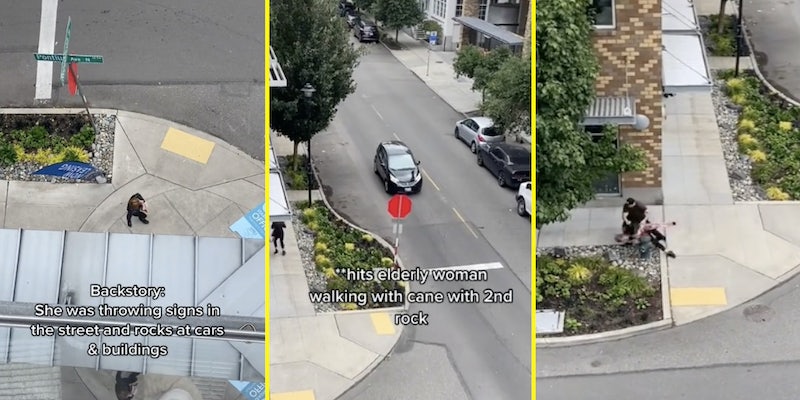 The man reportedly slapped a rock out of her hand, saying, 'No, bad!'

A woman throwing rocks at cars, signs in the street, and plants out of the ground appeared to throw a rock at an elderly woman with a cane. She was then tackled by a passerby and slammed into a fire hydrant—and it was all captured by a TikToker filming from a balcony in a Seattle building.

The TikTok came from @megznicole_‘s account, and it’s generated an astounding 21 million views in the first three days since it’s been on the platform.

The creator said that while a story time followup is coming, saying there are a “few things” she wants to answer, she also shared, “I’m in TikTok jail and can’t post for a few days.”

She did later rescind that offer, though, replacing that pinned post Tuesday afternoon with one saying, “I was banned from posting after it went viral. But I’m over all the rude comments. No one is entitled to ‘story time’ & now I won’t be giving it.”

The video is captioned, “Just another beautiful day in paradise (Seattle),” and sarcastically uses the hashtag #NeverStopExploring. Based on street signs and other signage captured in the video, it appears to have been taken from a balcony of an apartment complex in Seattle’s Lake Union neighborhood.

The video starts with the woman walking outside the apartment building throwing rocks, and the TikToker created an on-screen caption to signal what had allegedly come before: “Backstory: She was throwing signs in the street and rocks at cars & buildings.”

The video then captures her disappearing under the awning, and a moment later, the video captures several plants flung into the street which appear to be the woman’s doing.

She then emerges, running across the street, throwing one rock, and then a second. The caption alleges that she “hits elderly woman walking with cane with 2nd rock.” The angle on the video doesn’t capture the rock hitting its target, because of an awning on the building across the street obscuring the view. It does, however, capture the rock thrower heading back toward the intersection and the shocking twist to the TikTok.

A man approaches the scene running, tackles the rock thrower, and slams her against a fire hydrant. The woman with the cane then emerges, and the man appears to check to see if she’s OK. He then goes back to the rock-thrower to have what appears to be a heated exchange before she stalks off.

Though it’s hard to make out what they’re saying, the creator reported in her comments that the man slapped a rock out of her hand that she was still holding onto, saying, “No, bad!” The creator also heard the rock thrower, referring to the woman with the cane, yelling, “What about that queen over there?” in reference to her.

It appeared from the video that the rock thrower might be dealing with some mental health issues. The TikToker insinuated that alcohol was a factor in her behavior.

“We can enable her behavior and assume she has a mental illness,” the TikToker wrote, “or we can consider [the] fact that that was a wine bottle that broke on the sidewalk” when she was tackled.

The Daily Dot has reached out to the TikToker and the Seattle Police Department for comment.