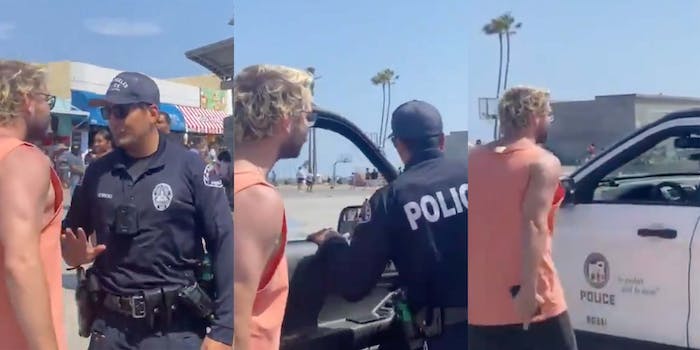 ‘This is what should be done with white privilege’: Video shows white man pressuring cops to leave area where they were harassing people

'I have zero time for yts who have anything less than this energy.'

In a video posted on Twitter on July 17, a white man is seen yelling at a Los Angeles police officer who allegedly had been intimidating people on a public boardwalk.

“Get the fuck in the car, tough guy!” the man says to a cop, who quickly gets into his vehicle.

The man is being praised on Twitter for his usage of his own white privilege. Some are calling him an accomplice to the Black Lives Matter movement.

“I have zero time for yts who have anything less than this energy,” @AngryBlkHoemo tweeted about the video.

As noted on Twitter, the white man’s ability to yell at a police officer without the cop retaliating—as far as the video shows—is an example of white privilege.

Many capitol rioters, a majority of them white, brutalized cops, were arrested, and given their due process. Meanwhile, Black people in America have been shot and killed by cops for simply walking home from a convenience store (Manuel Ellis), or holding a cell phone (Stephon Clark, Andre Hill).

The Daily Dot has reached out to the LAPD and Twitter user @ManarJarban, who posted the video.