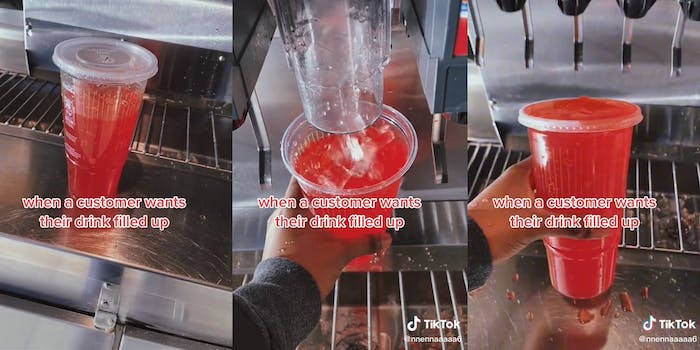 ‘When a customer wants their drink filled up’: McDonald’s worker shares what they do to fill customers’ drinks, sparking debate

'Not you acting like it comes out your paycheck.'

The latest in a string of behind-the-scenes TikTok videos from a McDonald’s employee shows how they fill up customers’ drinks.

“When a customer wants their drink filled up,” user @nnennaaaaa wrote via text overlay on the viral TikTok.

The user previously told the Daily Dot regarding another TikTok they shared that “it was all just jokes.” Regardless, the employee’s video filling a customer’s drink with ice received over 1.2 million views and sparked controversy in the comments.

“Y’all want that $20/hr, but then this [is] the type of effort you put into work… maybe the issue is the people, not the system,” one user said.

“Literally would use the exact same amount of energy to just fill it. but you need 14 an hour right?” another wrote.

“I don’t think 2 more ounces of sprite is gonna bankrupt you or a billion dollar company,” a third commented.

Several users said they ask for “no ice” so that they can avoid cups full of ice.

“No ice please, especially if I can take the meal straight home imma just get Ice from my house,” another wrote.

Many questioned why the McDonald’s employee simply wouldn’t fill the drink all the way.

“Why not just fill it to start [with] & then they wouldn’t have to ask for the drink they paid for to be filled?” one asked.

However, some fellow fast-food workers sounded off in response, stating that the automatic machines they use for the drive-thru can’t fill the cups all the way.

“My machine at my job don’t fill up all the way so [there’s] nothing we can do,” one user said.

“Yall takin it too serious.. first of all inside they fill up [their] own sodas and in the drive through the machine controls the amount it not like this,” another claimed.

The Daily Dot reached out to both user @nnennaaaaa and McDonald’s via email.