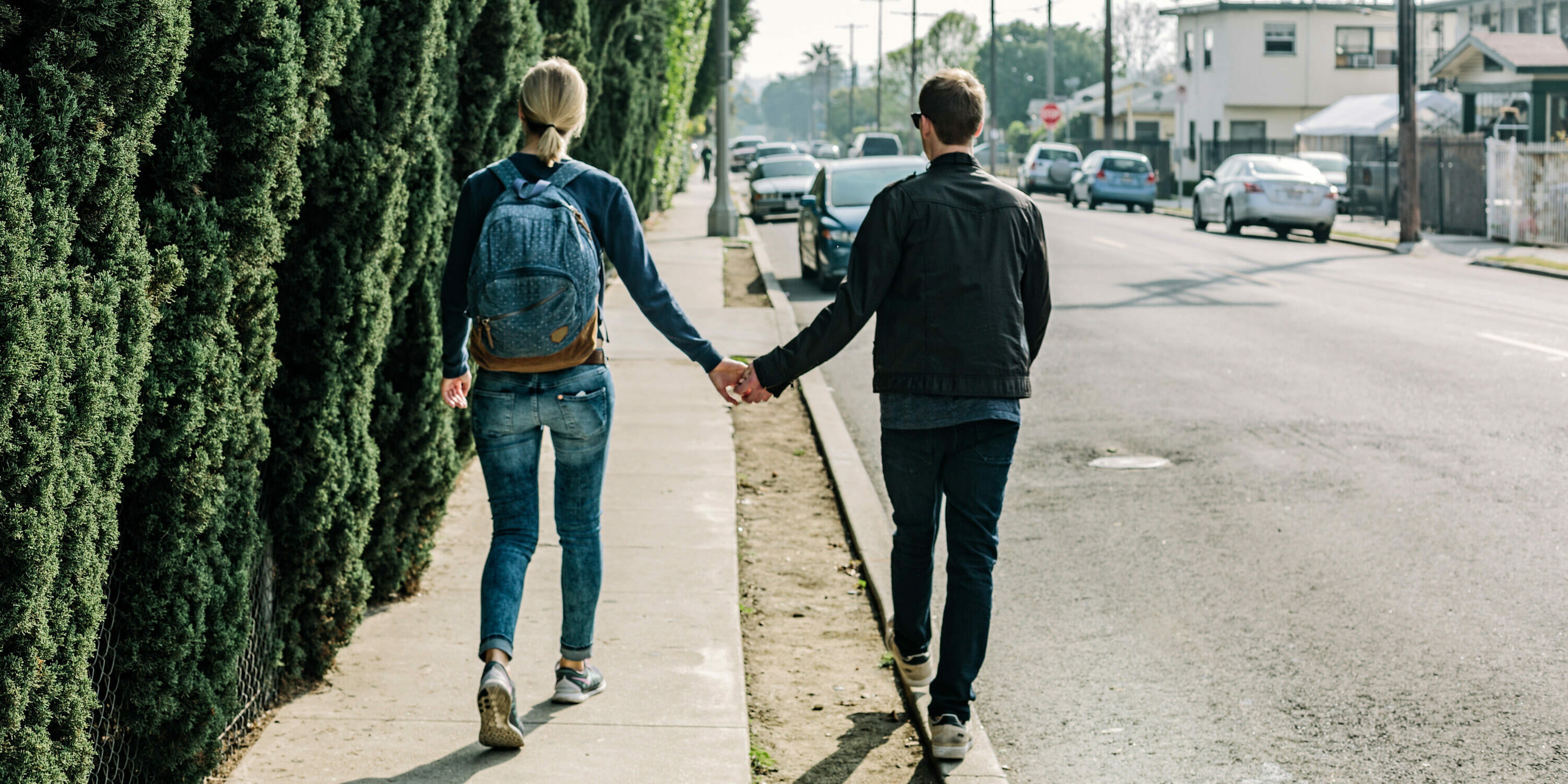 What it takes to make an open relationship work

Open relationships have nothing to do with being sneaky.

Kids these days seem more marriage-averse than ever. Millennials are tying the knot later and later (if they do so at all). In 2017, roughly 45 percent of U.S. adults were either divorced, widowed, or simply single. Monogamy is sinking in popularity as people increasingly opt to sort out their finances, pursue education and careers, and generally spend time working on themselves. If you’re seeking something more open, it’s important to define it. So what is an open relationship, and how do you know if it’s for you?

Lately, more and more people seem likely to gravitate toward more open arrangements. In recent years Google searches for “open relationship” have spiked, suggesting some widespread interest. Here’s what you should know about open relationships before you start perusing Tinder.

What is an open relationship?

“An open relationship is basically any relationship that isn’t undergirded by expectations of monogamy and exclusivity,” author and sexologist Carol Queen told the Daily Dot. “They can take many forms, and can range from casual ‘friends with benefits’ connections to solid, lasting (and non-monogamous) relationships.”

The word “expectation” is key to that definition, Queen says. Both parties need to be on the same page about non-monogamy. One party can’t secretly decide that they’ll be seeing people outside their relationship and call it open. Definitely not without consulting their primary partner and getting the green light.

“This is not the same as ‘I’m fucking around because no one is looking and I don’t intend to tell,’” Queen says. “The other partner/s may or may not have other relationships or engage in ‘sport sex’ themselves, but they … ought to agree that they are in an open relationship.”

In fact, a recent study suggests that people in open relationships derive as much satisfaction monogamous couples do. Call me crazy, but that might just be because of all the sharing. Or maybe it’s the trust implicit in not feeling threatened when your partner sleeps with other people. One common misconception about open relationships, Queen says, is “the notion that the relationship must not be that strong, or that partners have one foot outside of their commitment, waiting for someone better to come along.”

Why opt for an open relationship?

For some, the sexual component might be of key importance “when the original partners aren’t necessarily completely compatible sexually,” Queen says. For instance, if one partner wants a lot of sex and the other only wants a little. Or one partner is bi- or pan sexual and the other isn’t. Or maybe the partners have different kinks.

But a perk of keeping things open, she adds, “is that various important facets of our personalities get to seek out a compatible partner.”

Open relationships aren’t for everyone, though. “Some people are just wired to want open relationships or multiple relationships, while others are really, really into monogamy and can’t enjoy any other relationship configuration,” Queen explains, while some people can do either, “depending on the partner and the context.”

No brand of relationship attraction is wrong. With open relationships, she explains, people might “get more sexual variety in their lives than those who are monogamous.” But sex might not be the only reason someone wants an open relationship.

Polyamory, which translates to “loving many” is one way to be open. It’s also a term you may have seen bouncing around the internet in recent years, or heard mentioned on your favorite television shows. As we have previously explained, polyamory does not mean surreptitiously cheating on your significant other.

“Polyamory generally understood to involve people engaged in more than one relationship in a way that’s consensual, negotiated, ongoing to some extent, and honest as opposed to sneaky with another wife and family in the next town over,” Queen says. “In polyamory, there may be an existing couple who open their relationship so that each can get involved with one or more other people.

Queen says some poly folks view various partners as an extended family. “Think a big Thanksgiving dinner full of everyone’s lovers and lovers’ lovers,” she says. “Others keep their other partnerships more separated.”

Regardless of the way a person approaches polyamory, the unifying theme is loving relationships. Polyamorous people aren’t just having casual sex with different people at the same time. Instead, they’re establishing multiple, emotionally invested partnerships with all participants’ full knowledge and consent.

What is ethical non-monogamy?

Another style of open relationship is ethical non-monogamy, which differentiates itself from polyamory in that it involves a lower level of commitment to partners outside the primary person.

“Ethical non-monogamy is very similar [to polyamory], but may not involve other ongoing relationships,” Queens says. “This relationship style can hold a range of options, including more casual get-togethers that do not assume any degree of commitment, or extracurricular fun like sex parties.

Like polyamory however, ethical non-monogamy is backed up by honesty and consent. There is still no hint of sneaking around or keeping partners in the dark. In short, ethical non-monogamy means striking an agreement with your partner that you can see other people, within whatever parameters you agree on. This requires honesty, both within the core relationship and with new people. You must be open about what you’re doing, what triggers jealousy, and where your boundaries lie.

How to have a successful open relationship

Open relationships are not for the conversation averse. Be prepared to talk about your feelings and be prepared to listen to your partner. You should decide on your own if non-monogamy is right for you before you broach the subject with a partner. But keep in mind that if you’re on different pages, the scenario likely won’t work.

According to Queen, consent and communication are the baselines for intimate interactions in an open relationship. Lay down some ground rules that work for you. And, Queen stresses, only be non-monogamous with people who agree to that scenario.

Be honest about what you do and don’t want, and seek partner/s whose understanding of relationship is close enough that you can negotiate the specifics, including safer sex agreements.”

“This requires willingness to communicate about pretty much all aspects of sex, love, and relationships, and being trustworthy once these things are negotiated,” she adds. “It’s why we call it ethical non-monogamy. Honesty and compersion (the experience of joy in your partner’s joy) are values that help make polyamory stable. Non-monogamy requires accepting, managing, or vanquishing jealousy. And polyamory, especially, requires good time management skills!”

Is jealousy still a factor in open relationships?

People in open relationships may still feel jealousy, and it’s important to talk about what brings it up. But certainly, Queen cautions, don’t use new partners to bait your primary person. IMO, that’s a cruel thing to do in any scenario.

You also don’t want to force someone into accepting your relationship approach as their own. Non-monogamy isn’t for everyone, and that’s perfectly fine. “Browbeating, coercing, or wheedling another person into opening a relationship—or getting with you even though they don’t like the idea of being with someone who already has a partner—is NOT ethical,” Queen says. “Lying to a prospective new partner about your relationship status: Ditto.”

One person might choose to stay monogamous even if their partner doesn’t, and as long as they consent to an open relationship, that’s OK. You do you, so long as you aren’t trampling on the feelings of a person you love.

Keep in mind, your primary partner—or your tertiary partners—“may want little knowledge of the other relationship,” Queen notes. “They may not want to hang out at Thanksgiving, but they have a dog in the race at least as far as safer sex is concerned.

Queen says it’s important to have agreements about this. Everyone who is having sex should abide by the specific and straightforward rules set in place. “There may be other needed agreements too,” she says. “To engage ethically, people in open relationships can’t be loose about these commitments.”

At the end of the day, Queen says, “Successfully navigating open relationships requires excellent relationship skills. No matter what kind of connection you desire with others, those are worth honing.”