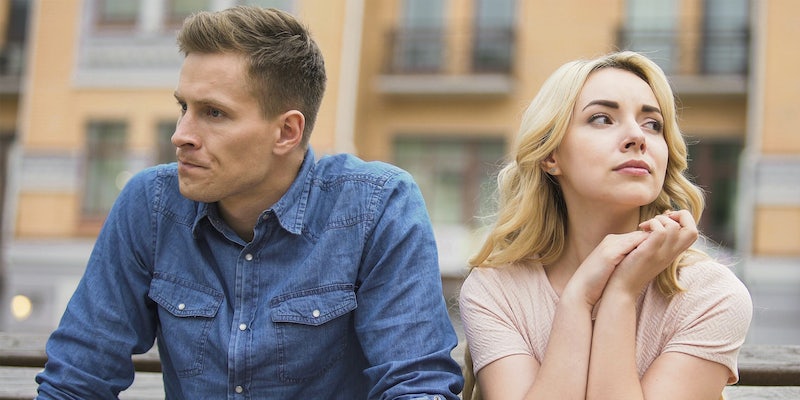 A guide to breaking up with someone without being a jerk

Breaking up is hard to do—but not impossible.

If you want to break up with your significant other, the most challenging part can be putting your gut feelings into words. There are countless reasons to end a relationship. Maybe it really isn’t them; it’s your need to pursue a new direction/career/home/cat ranch to join. Maybe it actually is them, and you just can’t take the mouth noises they make while eating anything, especially soup. Or maybe it’s more serious than that, and you’ve just realized your S.O. has long been gaslighting you. No matter the context, you’ve simply lost that loving feeling. But how do you break up with someone the right way?

Although a breakup seems like it should be tailor-made for a specific couple, rather than a problem fixed by a blanket solution, there are some fail-safe tips to smooth out the process—because breakups don’t just cause emotional and mental anguish, they can also take an unfortunate physical toll on the body. Apparently, your heart can physically enlarge and begin functioning abnormally, neurological dips in serotonin can send you into a situational depression, and stress can spike your blood pressure and create breakouts. In the worst cases, a bad breakup could make you feel like you’re withdrawing from addictive substances, thanks to that pesky cocktail of brain chemicals get us hooked on a person in the first place.

In any case, each and every one of us would love to escape a breakup with the lowest amount of collateral damage possible, and without having to revisit the topic again over weeks, months, or even years. So the Daily Dot asked a relationship therapist: What is the best way to break up with someone?

How to break up with someone: Best practices

According to Paulette Sherman, a psychologist and author of Dating From the Inside Out, you don’t want the breakup to “feel like a hit and run.” The best breakup language, she says, would typically entail “a combination of being very polite and kind, and also being very honest and direct.”

“Maybe start out with something positive before you break the news,” Sherman says. “You can start out by saying, ‘This is a hard conversation for me and I want you to know that you’re really important to me. I think you’re beautiful, you’re fun to be with, I’ve learned a lot from this relationship.’”

“If that’s true, you obviously could go into what that is,” Sherman says. And if it’s not, there’s no harm in such a small kindness.

In any case, Sherman thinks it’s best to be unflinchingly clear about the fact that, ultimately, you can’t see a future for the two of you. Emphasize that it’s best to end things for a specific reason. For example, Sherman suggests clarifying that “it’s hard for me to say this, because I don’t want to hurt you in any way and I wish you all the happiness, I just think ultimately it would be better for both of us.”

The person on the receiving end of the breakup speech may become angry or audibly upset. As the instigator, it’s your duty to hang around and answer their questions, listen to their thoughts, and discuss any further factors. Clarify whatever allows them to achieve closure. But if this person is suddenly wracked with emotion and wailing in the middle of your favorite bar, consider extracting yourself. When someone is over-the-top upset and cannot control their feelings, Sherman suggests asking three times for them to lower their voice, or whatever the case may be. If they can’t or won’t, end the conversation there and leave. Propose they send you an email in a few days so you can address any lingering issues.

With the emotional volatility in mind, think critically about the most appropriate place for your partner to receive and begin to process the news.

Sherman suggests a public venue, which should help cap any knee-jerk rage, raised voices, table-flipping, or uncontrollable sobbing. “You want it to be private, but sometimes even going to a restaurant or public place is good because there’s no screaming or things like that,” she says. “If you go to someone’s house, it could go on forever or get really dramatic that way.”

Finally, it can be harder to leave, but arguably the worst place to break up with a difficult partner is in the comfort of your own home. Forcing them out could escalate things quickly, and allowing someone to stay longer than necessary causes the event to drag on.

My venue of choice? Meet for a walk in the park, or a similar outdoor space where you don’t have to plunk down money for a beer or a snack then sit awkwardly across from someone or waste a meal. Parks allow you both to easily extricate yourselves from the situation as soon as you need an out.

“I hope we can still be friends” is a bafflingly popular line people cast directly after dealing the death blow. In reality, it doesn’t make sense. If the dumper floats the idea, it might be because they’re uncomfortable, spitting out sentiments they don’t mean in an effort to do emergency damage control. If the dumpee proposes sustained friendship, they probably aren’t ready for the relationship to be over just yet. But if you really and truly want out without the mess, take friendship off the table—at least for now.

Sherman explains that when we kiss or even sleep with our partners after we break up with them, we send mixed messages. Which, duh, but breakup sex is so excruciatingly common it bears noting. “It’s best to really be like, ‘I’ve thought about this and I am clear that this is what I want to do, and I’m sorry if it hurts you,’” Sherman says.

In that same vein, keep the golden rule of modern dating in mind: Unfollow them. Remove them from your speed dial, too, and consider blocking their number for a bit if you are the kind of person who might hit your ex with a drunken booty call. If you’re doing the dumping, you have to let your ex go. To keep stringing them along would be both cruel and unfair.