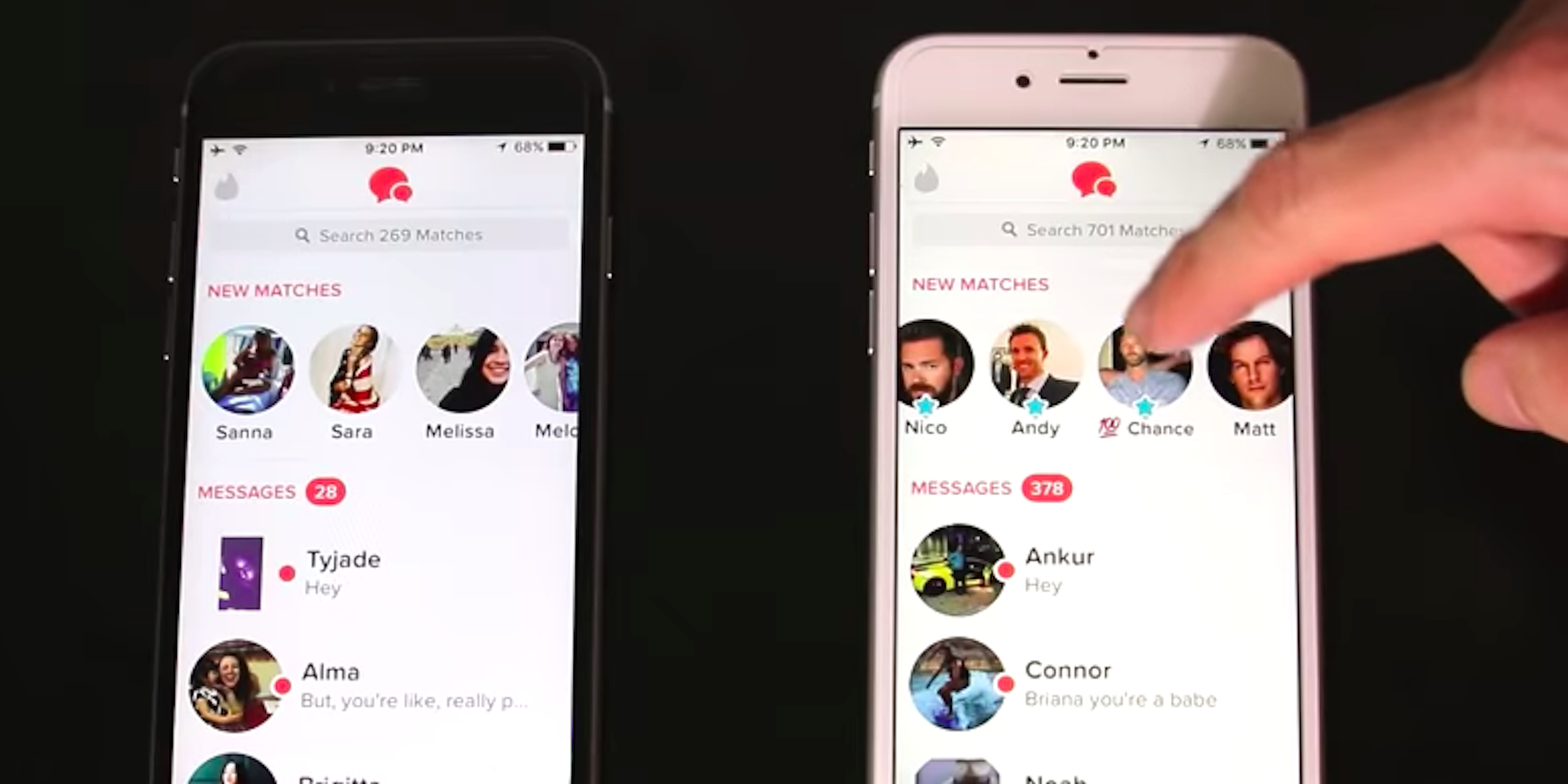 How to avoid getting duped by a Tinder bot

Spot the bot and get back to flirting with real people.

So you’re chatting with a stupid attractive match on Tinder and things seem a little…off. While you want to believe this is the person with whom you’ll be booking your Saturday night sex appointment, maybe he’s holding a conversation as awkwardly as he’s holding that fish in his profile. Or maybe she’s dodging your introductory questions and instead enticing you to try some Instagram-famous matcha powder. Or, worse, this enigmatic match has just sent you a link to send them money, apropos of nothing.

Congrats friend, you seem to have bagged yourself one of many Tinder bots. And it’s a fairly easy thing to do in an internet dating world where fake profiles abound.

Like any digital platform designed for human-to-human chat communications, Tinder presents ample opportunity for software engineers to send in the chatbots. Plus, we all know that anonymous communication platforms of any kind are catfish hotbeds. Your match could be hiding behind the mask of a more attractive or younger picture (for what kind of gain, I don’t know) or pretending to be a different person entirely. Before you give up the search for online love and delete Tinder forever, learn how to spot a fake Tinder profile instantly.

How to spot Tinder bots and fake Tinder profiles

What is a bot?

According to a 2017 report by cybersecurity firm Imperva, bots—good and bad, although the bad outnumbered the good—accounted for just under 52 percent of internet traffic in 2016. Bots are basically just software with a mission: It talks to you, via text or verbally in the case of a more advanced bot like Alexa (who maybe also spies on you), and performs the tasks it’s programmed to perform. So what does it mean for a bot to be bad?

As Time explains, innocuous bots might help streamline your internet searches, cutting away the fat so you’re left with the most relevant results, or control the content packaging on your social media accounts. Bad bots have more sinister ends, crawling web pages to skim your credit card information. Hackers might deploy these codes to steal login credentials and gain access to internet users’ personal details.

What is a Tinder bot?

What of the bots sending you strange non-sequiturs and facsimile sexts on the dating apps? At the risk of dating myself, a Tinder bot is like SmarterChild but scammy. If a match engages you in stilted conversation and then starts sending you links, definitely don’t click. Those links may infect your device with malware or take you to a portal where the bad bot can hack your bank account and other sensitive info.

How to spot a Tinder bot

Although the links offer one telltale sign, Tinder bots don’t immediately announce themselves as such. (Although, apparently, “female” bots targeting straight men are most prevalent.) In 2015, BuzzFeed cataloged some bot-like profiles, marking the red flags. Profile pictures of celebrities, obviously photoshopped pictures, professional headshots as profile pics, or just one profile pic were common themes. Also be on the lookout for egregious misspellings or odd grammar in the bio, nothing but a link in the bio, a flood of messages the moment you match, dirty talk, immediate invitations to sex, or immediate enticements to join them in a long-term relationship.

In its “Hot or Bot” exploration of fake Tinder profiles, Splinter notes that most people revert to short, fairly generic responses of the “lol” variety. Some bots ask extremely basic get-to-know-you questions out of the blue before the conversation has settled into a normal flow. Bots can mimic your responses and will comb through bot archives to match the language people often use in certain situations. They will likely throw a lot of random questions your way that might be mistaken for quirky banter. But as TechJunkie points out, personal questions may help crack your security questions on personal accounts. A bot might even remember telling details about you such as names you’ve mentioned and dates. As such, it’s not particularly hard for Tinder bots to pass as people—at least at first.

As Splinter notes, you can test your potential bot match by peppering your exchanges with chunks of nonsense letters. If your match’s response indicates it accepts “gfjnksnj” as a real word with meaning, it’s likely a bot. But think about your elementary school communications with SmarterChild—if it didn’t understand what you were talking about, it would tell you. More advanced bots might respond with something like “what?” or “wtf.” It might also pivot and simply ask another unrelated question.

Additionally, try asking your suspected bot companion questions to which the answers are obvious. My favorite of Splinter’s suggested queries: “Would it hurt if I stabbed you with a towel?” That might elicit some candid and authentic responses from a human, but a bot probably won’t know how to interpret the situation.

Sometimes, the fake profiles you’re seeing out there will be Tinder bots. But some of them might have real humans running their responses with the end goal of extracting the same kind of personal info from matches. Sometimes, according to one Gizmodo investigation, they will be actual or purported members of the U.S. military in need of an immediate wire transfer from you, a stranger. These scams often employ other peoples’ pictures, a maneuver you can identify with a few simple tricks.

First off, if your match only has a couple very generic photos—nothing candid, just staged photos someone might submit for an audition or post on their professional website, or have featured on, say, a college or university’s homepage—those could feasibly be downloaded by anyone on the internet. As one HuffPo blogger and former criminal investigator explained, it pays to do your homework on especially attractive matches whose profiles just feel like a farce.

Try running a reverse Google image search on profile pictures to confirm names and basic biographical facts, if you aren’t sure. You can also fact-check the information they give you. Did she attend the school she said she attended? Is there a David of this description working in that particular New York niche industry? It may seem creepy and paranoid to do so much recon on a stranger before you meet them in person. But think about it: With so much of our lives lived online, it seems like many of us have forgotten the basic tenets of stranger danger. A person you meet online can be anyone. People can and do operate under false identities, and their intentions are almost never good. Be wary out there.