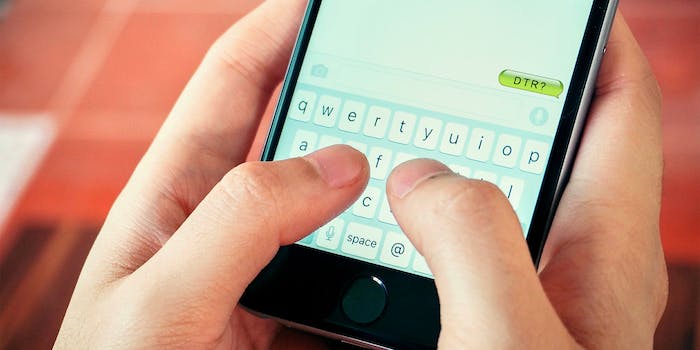 When and how to DTR, according to a dating expert

One of the most famous stereotypes that exists around millennials is that we don’t know how to date. A generation of surprisingly sexless, somehow still hookup-driven egoists, we are too reliant on technology and overwhelmed by limitless choice to conduct anything but clumsy quasi-relationships. That is, if the think pieces are to be believed.

In any case, perhaps romantic ineptitude has given way to a lot of casual arrangements. The parameters of dating, talking, hooking up, and seeing someone are murky at best.

What does DTR mean?

One typical conundrum: When to define the relationship (DTR). Otherwise known as: Asking what you and the Tinder match you’ve been sleeping with for six months actually are to one another.

And brace yourself, because here comes the bad news. If you’re reading this, it may be too late: The time to DTR is actually before the relationship itself has even begun—at least according to one expert.

“When you date or connect with somebody, it’s always important to be clear with yourself about what you’re doing,” says Brenda A Lewis, LCSW, sex therapist and relationship psychotherapist. “Your intentions need to be clear. If you are dating with the idea of having a real relationship, then I would say [so] early on.” If you’re sitting there silently hoping that the person you’re seeing feels the same way you do, Lewis explains, you may set yourself up for a big disappointment.

What does it mean to define the relationship?

The official DTR meaning is different for everyone. However, for most people, DTR means sitting with your partner and clarifying what you’re doing.

In some cases, maybe you’re looking for lasting love. In others, you might simply be looking for a safety guarantee that the person you’re having sex with isn’t also having sex with anyone else. Lewis stresses that you need to be clear about what you’re looking for from the get-go. This requires checking in with yourself about your actual goals before you even start dating, and developing the ability to voice your thoughts to a partner. According to Lewis, there isn’t a one-size-fits-all time to have the DTR talk.

“There’s so many different ways to define the relationship, there isn’t just one,” Lewis says. “I think from the very beginning, even from the first meeting, [say] where you’re at.”

If you just broke up with someone, for example, what are you ready for? Are you open to the idea of entering into another relationship, or do you still need time to process things? Are you just looking for a casual hookup? A friend? Be clear.

Bringing up your (potentially shared) future on a first date might sound overly aggressive. But that’s not really what Lewis is advising. Rather, she simply encourages people to be honest about what they’re looking for, as early on as possible. If you’re dating with intention, you’ll know fairly quickly whether or not a partner is on the same page. Similarly, if you’re a person who’s only interested in casual sex, or a casual relationship, it’s kind to clue in your partners.

First dates are about getting to know one another and seeing if you can at least stand to have a second drink. The “here’s what I’m looking for” conversation doesn’t have to happen at meeting number one, but it should happen early on. Or if you’re very practical and don’t want to waste time, go ahead and state your larger objectives right away. Then, if the person sitting across from you doesn’t want the same things, you can continue your search elsewhere.

“You may like the person, but it’s got to be mutual for it to be right,” Lewis says. “It’s the right time combined with the right values of the person.”

When, exactly, is the right moment to raise the question depends on the specific situation. Still, Lewis doesn’t advise letting things dangle for months on end. “I don’t think you should wait six months and be intimate with someone and just hoping unconsciously,” she says. “That’s giving someone else a lot of power if you want to be in a relationship.”

Admittedly, telling someone how you feel is a daunting prospect with the potential to end in embarrassment and/or hurt feelings. Again, Lewis isn’t telling you to confess any huge emotions; rather, to briefly state your case so the other person knows what they’re dealing with. It can be casual: “Like, ‘Hey, I’m enjoying this, and I would like it to continue, and I would like just to be with you. How do you feel about that?’” Lewis suggests. “You learn things when you talk about your feelings and where you’re at, and then if you listen, it’s either a green light or a red flag.”

The single most important ingredient here will be the ability to achieve peace with the answers you receive, whether or not it’s what you wanted to hear. To that end, it’s extra advisable to raise the subject before you get too attached. If you know in the beginning that you are looking for a relationship, simply say so. While you understand that you’re still getting to know one another, you’re on the apps because you want to find a partner to some capacity. It’s possible the person you’re seeing wants that, too. It’s also possible they don’t—but if that’s the case, you could eventually find that out in a more hurtful way than during an early, honest conversation.

“You can’t go on hope,” Lewis says. “You have to go on reality.” You can’t make assumptions about what other people want, simply because you’re seeing someone frequently and you enjoy spending time together. Make your needs known in straightforward, undemanding terms. And remember that, even if someone seems perfect, they’re not perfect for you unless they want the same thing at the same time you want it.

“I think that you need to be comfortable with yourself and OK within yourself,” Lewis says. “The whole world doesn’t revolve around other people.”