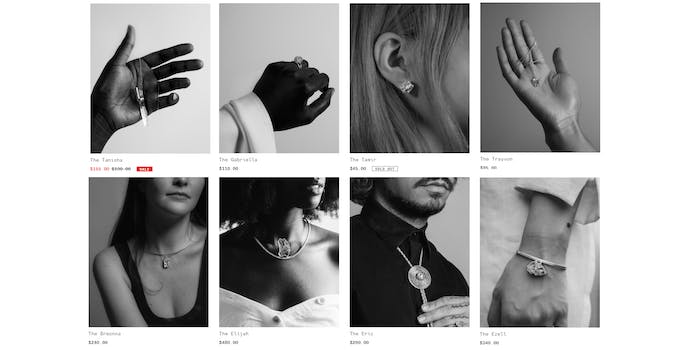 'It's as if the name attached to the product determines the monetary value of each life.'

A couple is being slammed on social media for selling jewelry online named after Black people killed or brutalized by police.

According to a spread in the Charleston (S.C.) Scene, area-based designers Paul Chelmis and Jing Wen, who founded Shan Shui, a nonprofit group, created a jewelry line called, “Wear Their Names,” a tacky play on the galvanizing phrase, “Say Their Names.”

The couple named the pieces after Black people who have died in police brutalities. For example, there are necklaces called the Trayvon (Martin) and the Breonna (Taylor).

The line includes earrings, bracelets, and necklaces, with all of them including shattered glass pieces from store windows that were broken during the rioting on trendy and historic King Street in downtown Charleston on May 30.

The unrest followed the death of George Floyd in Minneapolis. However, the Charleston/North Charleston metro area also has a sordid and violent history with racial matters and policing.

On Twitter, though, the pricing quickly became an issue, including reasoning around why some would cost more than others.

“Also is it just me, or is naming each accessory after victims of police brutality & then pricing them differently giving…..slave auction-ey vibes???” tweeted @sophieming_, replying to her viral tweet. “It’s as if the name attached to the product determines the monetary value of each life. That’s what I’m getting, it’s disturbing.”

Some doubted how the jewelry could be purchased in good faith. For example, @faciliheir sarcastically tweeted: “hey, nice earrings!” “thanks, they’re about a murdered child.”

“The idea of jewelry made from the broken glass at protests I can live with,” said @fulljungleazn. “The naming of the individual pieces???? Go directly to hell.”

One of the pieces, the Tanisha (Anderson), was already discounted. Anderson, 37, was killed while in police custody in Cleveland in 2015.

The Shan Shui-related social has been shut down. Its website is now limited to a single page with a statement from the couple.

“Just want to say we’ve heard the feedback from the community loud and clear and are taking it seriously. So sorry to those we offended or harmed,” it starts. “While our intentions were pure and we consulted with a wide variety of people before launching, it is clear that there are issues with the approach we took. Though we only wanted to honor the victim’s names and retell their story, we see now that using those names was inappropriate and in poor taste.

“The two of us started this project from a place of creativity and in good faith, with a sense of duty to do our part and help the movement by bringing funds and awareness — and through all the backlash we want to keep sight of that duty and move forward on the best path. We’ve shut down the entire site and permanently stopped the project, and are going to take a step back and a deep breath to figure out how to proceed.”

Proceeds were being donated to From Privilege to Progress, a national nonprofit “desegregating the conversation about race on social media.” Following the recent controversy, Gibbes Museum of Art canceled the sale of the “Wear Their Names” jewelry line, previously scheduled to launch in the museum’s store next week.