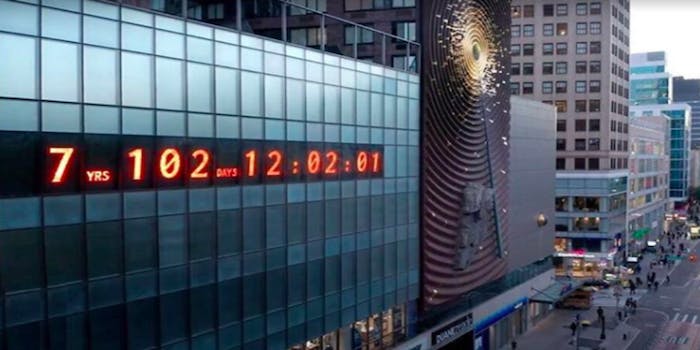 This viral Instagram reminds people how real climate change is

On Monday, the Washington Post posted an image of the famous Metronome clock in Union Square to its Instagram account. Unusually, the Manhattan-based time tracker didn’t showcase the current time but instead revealed how much time is remaining until climate change is irreversible. The startling number displayed seven years and 102 days.

The image has since received more than 14,000 likes and has been reposted to Twitter, where it instantly went viral.

In the screenshot posted by Twitter user David Amaya, a disheartening conversation about the future state of the world unfolded. It’s been faved 8,400 times as of Tuesday morning.

The Climate Clock, as artists Gan Golan and Andrew Boyd have named the figure, displays the time left until Earth’s carbon budget is exhausted, based on current emission rates and trends. “A total depletion would thrust the world into further turmoil and suffering through more flooding, more wildfires, worsening famine and extensive human displacement, according to the artists,” the original post reads. The only effective reversal strategy for climate change is immediate, collective action, which the post warns “if Earth’s temperatures increases by 1.5 degrees Celsius, the planet will fall victim to extreme heat waves, fires, droughts and limited water availability…”

The clock’s lifeline figure, displayed in green, tracks the percentage of available energy being supplied from renewable sources. To date, that number is 27.7%. While several people questioned the necessity of this reminder during already unprecedented times, the facts remain the same: Climate change is real and requires immediate government action.