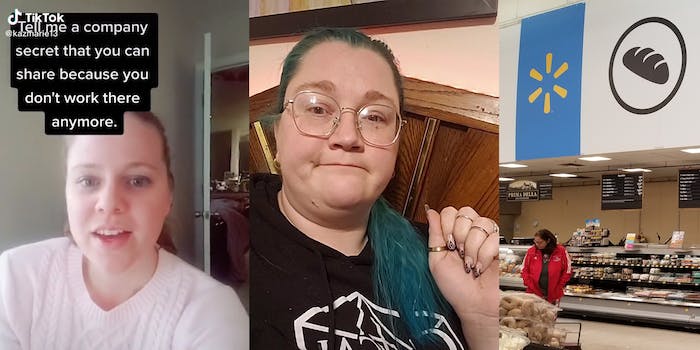 ‘Tell me a company secret that you can share because you don’t work there anymore’: Ex-Walmart worker says bakery doesn’t actually bake your sheet cakes in viral TikTok

'Nothing is actually baked in the bakery.'

A TikToker who says she used to work in the bakery at Walmart alleged in a viral video that “nothing is actually baked in the bakery.”

Kat Marie (@kazmarie13) says in the video that the bakery just thaws out pre-made, frozen sheet cakes for custom jobs.

Marie was responding, via a stitch, to a question posed by another TikToker, @princessannafit: “Tell me a company secret that you can share because you don’t work there anymore.”

The video caption also alleges that the “icing comes pre-made and pre-colored in gallon buckets.”

It is reportedly common for bakeries to pre-make their sheet cakes and freeze them to use for later, but Walmart apparently doesn’t make its own sheet cake at all. According to both Query Sprout and Cake Central, Walmart bakeries order pre-made sheet cakes from Pillsbury and thaw them out depending on their needs.

While it doesn’t disclose exactly how its bakery operates, the retail giant refers to it as a “fresh bakery” on its corporate blog.

Other alleged Walmart workers are co-signing the allegation in the comments section.

“Nope, everything be frozen, even the bread and donuts,” @devils_foxy_roxy said.

“I’ve been with Walmart 15 years though, and I can remember when a lot more of it was made in-store. It has slowly shifted though,” @djbarton8 wrote.

The Daily Dot reached out to @kazmarie13 through TikTok direct message and Walmart via email.