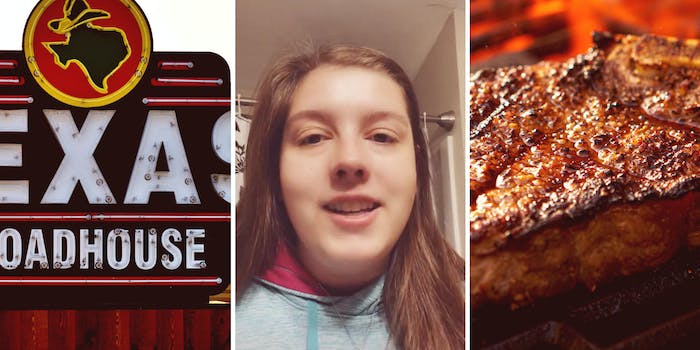 ‘I tell everyone I serve at Roadhouse this hack’: Worker reveals money-saving menu ‘secret’ at Texas Roadhouse in viral TikTok

In a viral video, a TikToker who says she’s a former Texas Roadhouse worker shared a hack to get more bang for your buck.

“Here’s the deal: You actually get 9 ounces of filet with the filet medallions. The regular menu only has a 6 or 8 ounce option. It’s cheaper than the 6 or 8 ounce option, and you get an extra side,” the TikToker, Ashley Everson (@aever17), says.

She says the filet medallions come with either rice or mashed potatoes, but customers can substitute it with any side.

“So you get an extra side, an extra ounce of meat, and it’s cheap. And you get the filet—it’s the best steak. You can’t beat that,” she says.

The former employee’s hack received over 5.7 million views, and several users were initially afraid she was going to share a secret that would spoil the restaurant for them.

“I thought you were gonna ruin TRH on me. i would have been maaaad!!!” one user said.

“I was scared to watch.. love Texas Roadhouse,” another said.

“The fact that you had one secret to share and it turned out to be so wholesome shows what kind of company Texas roadhouse is,” a third added.

Others were specifically worried about secrets regarding Texas Roadhouse’s bread rolls.

“I thought you were about to talk about the bread and I was gonna be ready to fight,” one user said.

“If you said ANYTHING bad about the rolls, it would’ve been my 13th reason….” another said.

Another Texas Roadhouse server backed up the TikToker’s hack. “I tell everyone I serve at roadhouse this hack. Every time someone orders and 8 oz I tell them about the medallions. Save them money, they give you $$,” they wrote in the comments section.

Others who also claimed to be former servers shared their own Texas Roadhouse tips.

“I used to be a server at TRH. My pro tip was always that you can get half an appetizer as a side,” one user said.

“Ex waitress from there ! So true. And DO NOT waste your $ on Mac. It literally box macaroni in bag they throw in the microwave,” another said.

However, one former employee said there’s a reason why the filet medallions are cheaper than the regular filets.

“Okay also worked at roadhouse for 9 years and while this is true, the filet medallions are actually filet SCRAP. That’s why it’s cheap,” they alleged.

Though another user denied that claim.

“Medallions are definitely a way for them to get their bang for their buck out of a tenderloin, but it’s not ‘scrap’. It’s just not the center cuts,” they said.

The Daily Dot reached out to user @aever17 via TikTok comment and Texas Roadhouse via email.