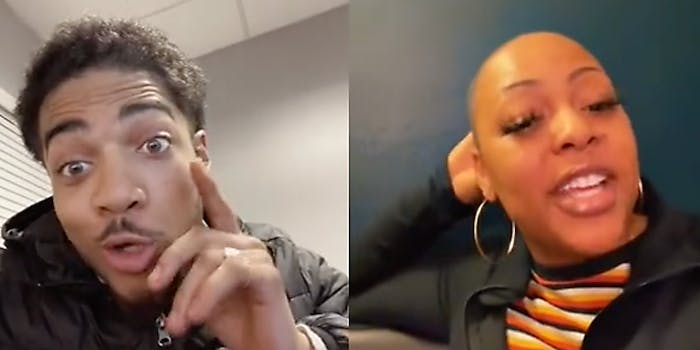 ‘They are selling you guys cars with unreported accidents’: Former worker exposes Carvana for allegedly not inspecting damage in viral TikTok

'If you're out of the seven-day-money-back guarantee period, you're screwed.'

A TikToker who says she is a former Carvana manager alleged in a viral video that Carvana doesn’t inspect for vehicle damage when buying cars.

Keshawn (@lifewithkey_) is a car salesman and TikTok content creator with over 535,100 followers. He regularly posts content about what to watch out for at car dealerships and his work as a car salesman.

He boosted @luhv_xxpozed’s video, alleging that the secondhand dealership doesn’t inspect for damage before buying and selling cars, in a duet. @luhv_xxpozed was responding to a popular video from a TikToker who asked users to “tell me a company secret that you can share because you don’t work there anymore.”

Captioned “Carvana isn’t a good place to buy,” Neasha’s (@luhv_xxpozed) 15-second duet received over 837,200 views in under a week.

Carvana is an online car dealership where buyers can browse for used cars online and get them delivered to their homes.

In her video, Neasha states that she was a member of management at Carvana for three years.

“They’re taking those cars in with frame damage and not inspecting the frame damage. They’re selling you guys cars with unreported accidents, cars with accidents that haven’t shown up on the car facts yet.”

According to Neasha, any damage not discovered during the seven-day-money-back guarantee period will have to be paid for out of pocket.

“If you’re out of the seven-day-money-back guarantee period, you’re screwed,” Neasha says.

“They don’t care about your BBB complaints. Those are being responded to by regular customer service reps, so if you feel like you got a bad car, and you don’t have a lawyer, and you’re trying to get out of it, you’d better file an attorney general complaint because that’s the only way you’re going to get help dealing with that,” Neasha says.

Carvana claims on its website that “We do not sell cars that have been in a reported accident or have frame or structural damage.” However, the Wall Street Journal reported that the company is facing multiple fines and government scrutiny after customers filed complaints in several states. There are also reportedly several outstanding complaints on its Better Business Bureau page regarding delayed license plates and paperwork and unaddressed damage.

Some TikTokers who claimed to be former workers at used car dealerships chimed in via the comments section, co-signing what Neasha said.

“I used to work here, everything she’s saying is accurate,” @redragtop said.

“Worked for CarMax and it’s the same. We’ve had cars slip by and it happens everywhere. CarMax definitely does better at catching sketchy things though,” @theafkrager said.

Others, on the other hand, shared a more positive experience with the dealership.

“My experience with them have been good so far,” @sorealmack said.

“Hmm I purchased a luxury vehicle from Carvana in May 2021 and have no problems,” another said.

The Daily Dot reached out to Keshawn via TikTok comment, Neasha via TikTok direct message, and Carvana via email.