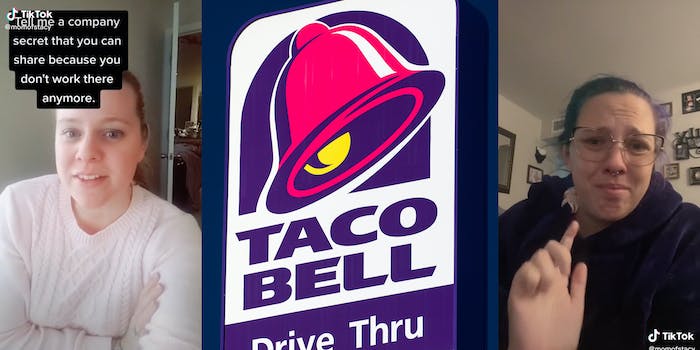 ‘Run the opposite way from the shredded chicken’: Worker shares what Taco Bell items customers should avoid in viral TikTok

In a viral video, a TikToker who says she’s a former Taco Bell worker shared which meats customers should allegedly avoid.

“So I worked at Taco Bell for almost three years, and I’m here to tell you all the truth,” the user, @momofstac,y says in the video.

The alleged former employee first notes the safe food items, claiming that the seasoned beef and grilled chicken are real meat and “fine” to eat.

Over 10 years ago, Taco Bell was reportedly caught in a class-action lawsuit regarding its seasoned beef, which claimed that the meat did not contain a large enough percentage of beef to be considered beef. It ended in 2011, when the fast-food chain provided more information about the meat in its marketing, according to NPR.

Despite this earlier meat controversy, the former employee says the seasoned beef is perfectly safe to eat. “Ground beef is in fact real ground beef. It just has a lot of water and seasoning in it, but it’s safe I promise,” the user says.

However, she warns against the shredded chicken.

The former Taco Bell worker suggested customers swap out the shredded chicken for grilled chicken instead.

“The shredded chicken is all of the bits of the chicken that you don’t want to eat, and I promise you, eventually, you’re gonna get a bone,” she continues.

When she moves on to discuss the steak, she uses air-quotes when describing it.

“Also the ‘steak’—so disappointing because I know it’s like the most appetizing thing—it’s 90% gelatin,” the user says.

She claims that if the steak is left out for any period of time, it becomes a “slab of gelatin.”

“Just trust me and stay away from the shredded chicken and steak,” she says.

The former employee’s reveal received over 360,000 views, though several users in the comments said they would likely still consume the warned-against items.

“I’m gonna pretend I didn’t hear this lalalala i love the taco bell,” one user said.

“Disappointed about the steak but I’m probably gonna still eat it,” another said.

One former Taco Bell employee confirmed the user’s account: “I was a manager for 4 years at Taco Bell and she’s not [lying] lol..”

The Daily Dot reached out to user @momofstacy via TikTok comment and Taco Bell via email.