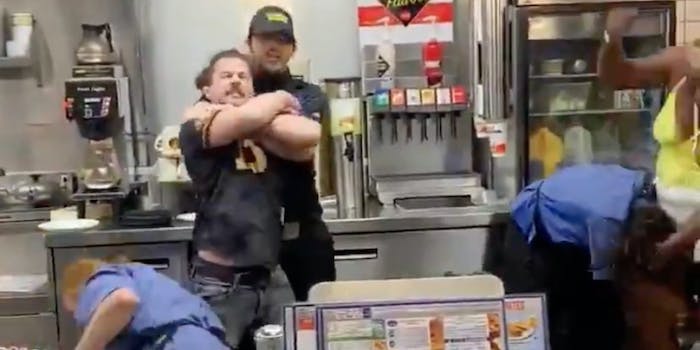 'When you apply to Waffle House the only thing they ask is 'can you fight?''

As surely as day turns to night, there will always be a Waffle House fight burning up the internet.

A combative group came into a Waffle House and demanded a phone that they seemingly left behind back. The staff refused to give it to them. It is presumed that they attempted to dine and dash, but the plan fell through once they returned for the phone.

In a now-viral video of the incident, the male customer goes behind the counter and punches a female Waffle House employee.

The other two patrons, two women, follow him behind the counter. In the course, one of the women’s breasts becomes exposed as she’s swinging at another employee.

This latest Waffle House scuffle doesn’t necessarily end well for the male customer, though. At the end of the video, he is forcibly held in the rear choke position. A bystander yells, “put that boy to sleep!”

Many commented on service workers’ plight, especially those working in 24-hour diners, such as Waffle House, which is widely known for its viral altercations.

@karachoyce wrote, “Unsanitary. And there should be penalties for going in a area where food is handled. This is gross and so dangerous. Service people don’t get paid enough for this type of abuse.”

@gfyoldguy replied: “For reals though, anyone who has to deal with the public needs to be paid more, so tired of people shitting on ‘service industry’ jobs. $15 an hour is not enough for this mess.”