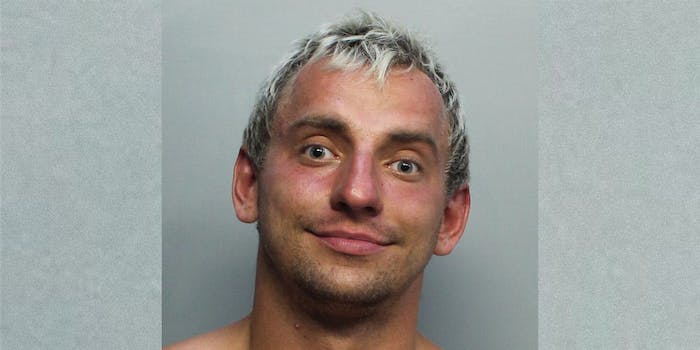 People were outraged at the assault and shared the photos on social media, slamming Zdorovetskiy.

After seeing the photos, some felt Zdorovetskiy should not have been released from jail.

“The guy’s a danger to society, what’s stopping him from doing it again?” one user tweeted.

According to the woman who was attacked, Lily Jensen, Zdorovetskiy attacked her at night while she was jogging. Jensen says she started screaming, which grabbed attention from neighbors, and scared off her attacker.

When witnesses saw the attack, Zdorovetskiy ran back inside his home where he was later arrested, according to TMZ.

Zdorovetskiy is facing a criminal charge of felony aggravated battery, and Jensen is suing him for battery, assault, and infliction of emotional distress.

Jensen told the police she had never met Zdorovetskiy before, and was “ambushed without provocation,” according to TMZ.

Zdorovetskiy is known on YouTube as a vlogger and prankster. Some recent videos include a self-explanatory “farting and peeing on people prank,” and a “breakaway bottle prank,” where Zdorovetskiy broke fake glass bottles on a woman’s head and recorded witnesses’ reactions.

In another video, Zdorovetskiy touched then-girlfriend Kinsey Wolanski’s butt in public, and she accused other men on the sidewalk. Many feel Zdorovetskiy’s pranks cross a line, and exploit women. Some have said this is why they’re “not surprised” at the news of an alleged attack.