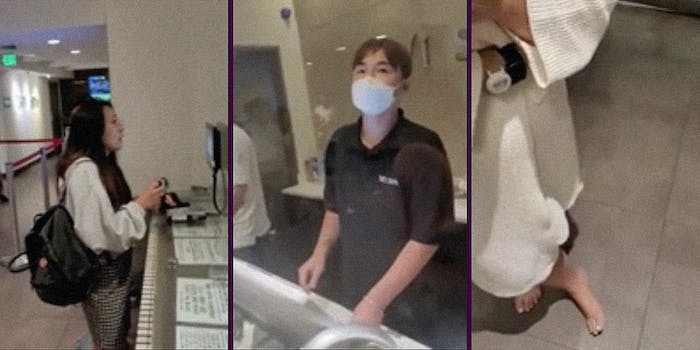 ‘It must be hard not being a real man’: Woman goes on transphobic rant over trans woman in spa locker room

A viral video shows a woman harassing a Los Angeles spa employee and going on an anti-LGBTQ rant after allegedly seeing a transgender woman in the locker room.

The video was posted to Reddit’s r/actualpublicfreakout page and was contentious enough that moderators closed the comments. The incident took place at Wi Spa, a Los Angeles-area facility.

“I just want to be clear: It’s OK for a man to go into the women’s section, show his penis around the other women, little girls, underaged,” the woman filming says. “Wi Spa, you condone that. Is that what you’re saying?”

The spa employee says the woman is transgender, but the transphobic woman doesn’t want to hear it. “What sexual orientation?” she says.

She continues to film and talk over the spa employee. “There are girls down there that are highly offended from what they just saw, and you did nothing,” the transphobic woman says. “Wi Spa is in agreement with men who say they are women, and they can go down there with their penis and get into the women’s section? Is that what you’re saying?”

A white patron approaches the woman and asks if the person in question is transgender. The person filming says, “As a woman, I have a right to feel comfortable without a man exposing himself.”

The man asks her if the person in question is a transgender person. Another transphobic woman joins the conversation and asks the man what would happen if a person with breasts and a vagina went into the men’s section. He says he would not be offended.

The woman filming then says the man might not “like women,” implying that he’s gay. “You’re out of alignment,” she says. “It must be hard not being a real man.”

It’s apparently not the first time there has been controversy over gender rights at the spa. One Trip Advisor reviewer accuses a spa-goer of being a “pervie” and faking being transgender.

Wi Spa did not immediately respond to the Daily Dot’s request for comment.