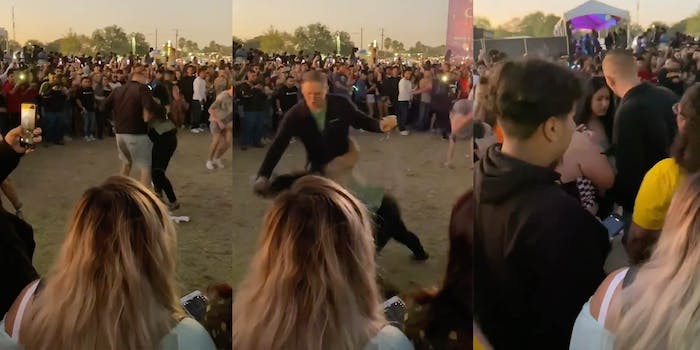 He appeared to be yelling at her for 'twerking.'

In a shocking video captured by a festival attendee, a man was filmed grabbing and yelling at a woman in front of a dance circle at the Mala Luna music festival in San Antonio over the weekend.

The clip, shared by Twitter user @j0ss_18 on Sunday, shows the young woman dancing in the middle of a circle with a few other people. When she starts twerking, the man rushes in, yanks her out of the circle by her hair, and pushes her to the ground.

Other women who witnessed the altercation confronted him. Though most of their discussion can’t be heard over the music, the man does mention the woman’s “twerking.” The man, who’s holding a drink, continues arguing with the other women in the circle then yells in the face of the woman he pushed down.

The other women step between them. The video cuts off when the woman who was pushed walks away.

Though many speculated that the man is the partner of the woman who was dancing and that other women are her friends, their relationships have not been confirmed.

She just started dancing and what We think is her bf didn’t “like” what she was doing so he did that.

The video has been retweeted over 11,000 times, and the replies are full of appalled viewers questioning why no other witnesses stepped in to intervene.

kinda disappointing how only women were trying to defend her ….