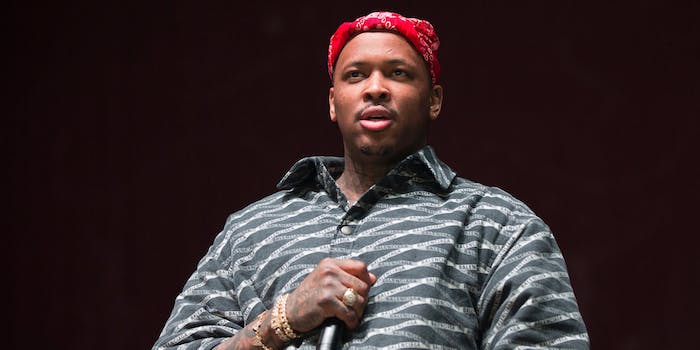 'If you f*ck with Donald Trump, you racist as f*ck and I can’t f*ck with you.'

YG, rapper and vocal critic of President Donald Trump, booted a fan offstage during his performance after the man declined to say “fuck Donald Trump.”

During the Mala Luna Music Festival in San Antonio on Saturday, the Compton rapper—who in 2016 released the protest song “FDT (Fuck Donald Trump”—brought a young white fan onstage after noticing his hesitation to participate during “FDT.”

YG spotted this dude and called him out on stage to say Fuck Donald Trump…he couldnt do it 😂😂 @malalunafest #malaluna2019 pic.twitter.com/nZQDudywke

“Listen, I spotted you out in the crowd, I asked you if you fuck with Donald Trump, and you said you don’t know,” YG said to the fan. “So since you don’t know, I need you to make up your mind tonight. I need you to state your name —because I know your mama, your daddy, your grandmama, your grandfather is watching—I want you to state your name and yell, ‘Fuck Donald Trump.'”

The fan is shook his head and refused.

“No, you won’t?” YG asked, as fans started booing. He then pushed the fan and implored security, “Get his ass out of here.”

YG’s security escorted the fan offstage. YG shifted back to the fans, wondering out loud why a Trump supporter would attend his show, given his loathing of the president.

“Don’t let his ass back in the crowd,” the rapper demanded. “Tell him YG said so.”

YG’s “FDT,” which features the late Nipsey Hussle, swelled in popularity throughout Trump’s 2016 presidential campaign. Armed with a powerful video, the duo makes passionate calls for unity among Black and brown youth, along with white fans expressing vehement distaste for Trump. The Los Angeles Times proclaimed it “the most prophetic, wrathful and unifying protest song of 2016.”