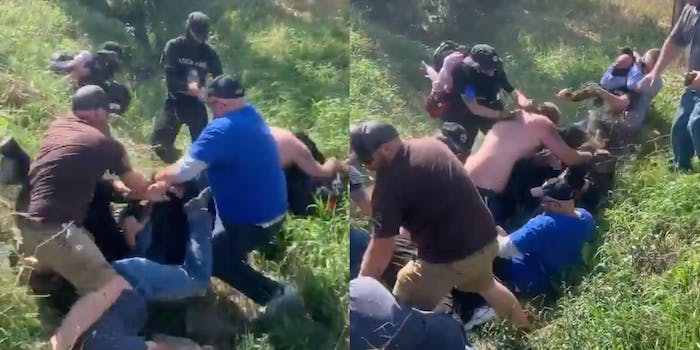 'Keep punching each other in the face, just don’t shoot anybody.'

Pro-police protesters are showing their support for law enforcement in perhaps the most unfortunately appropriate way—by violently assaulting those protesting police brutality.

Back the Blue held a rally in Fort Collins, Colorado, over the weekend to show support for police as a counter to all the Black Lives Matter protests that have been held across the country the summer. But when a small group of BLM protesters showed up, things turned violent.

Videos of the incident appear to show the pro-police group advancing on the BLM protesters, quickly culminating in a full-on brawl in a ditch.

Back the Blue supporters can be seen pulling people dressed in all black into the ditch, jumping on top of them, and beating them into the ground.

“Everybody, keep their hands of your weapons,” one man says calmly. “Keep punching each other in the face, just don’t shoot anybody.”

One man in a red shirt can be seen attempting to use an American flag as a weapon, aiming it like a spear to stab a BLM protester.

“I will fucking kill you,” screams somebody else.

The video was shared by Ciara Wilson, who said that “counter protestors were violently beaten and had no signs of aggression or hostility. Pro Police protestors forced them to the end of the block and then savagely assaulted them.”

A live stream shared by one of the Back the Blue members supports this narrative, with the man recording claiming that they are “marching the Antifa commie bastards out of the neighborhood because nobody wants Antifa in the neighborhood,” later screaming that they “came to the wrong city” once the fight was underway.

Subsequent footage shared in Wilson’s post shows members of the Back the Blue group piling onto a man who appears to be with the Black Lives Matter protesters and refusing to let him up until police come and break things up.

However, Wilson said when the police arrived, it was only the counter-protesters who were detained, and the video she shared only shows a BLM protester being handcuffed by police.

According to the Denver Post, three people were arrested and one was cited as a result of the fighting, and it is still looking to speak with people who may have left before the police arrived. Detective Erin Feit said there were “multiple physical disturbances” and claims that the people arrested were aligned with both groups, but names and charges have not yet been released.