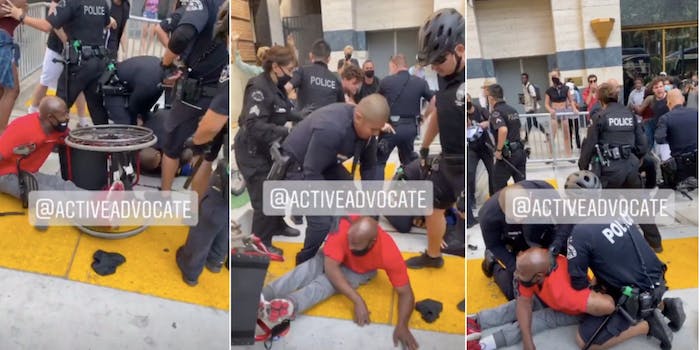 Police knocked Joshua Wilson out of his wheelchair and then broke it.

A viral video shows Los Angeles police throwing a Black Lives Matter protester out of his wheelchair and breaking it before arresting him on Tuesday.

Officers arrested three people after “several individuals in a group of protesters attempted to interfere and free a man and two women, who were in police custody,” according to a statement from the Los Angeles Police Department.

Police identified the man in the wheelchair as Joshua Wilson. According to the statement, Wilson “punched an officer in the face and a use of force occurred between the officers and Wilson.”

Instagram user @activeadvocate filmed the showdown and shared it on their story. The video shows several officers holding batons swarming Wilson as he tries to swat them away. They tip his wheelchair over, knocking him to the ground, and try to force his arms behind his back as another officer yanks his wheelchair away and throws it to the side in a crumpled heap.

Twitter user @allykerans posted the original video on her account, where it has been retweeted over 60,000 times.

“During a peaceful protest in LA this week the LAPD knocked a disabled man out of his wheelchair, and then they broke it,” she wrote. “There is absolutely no excuse for this – it’s disgusting. Who exactly are they protecting & serving?”

At the station, police reportedly found a loaded firearm in Wilson’s backpack, which he had on his wheelchair. Officers booked him as an “ex-con with a firearm” and set his bail at $35,000.