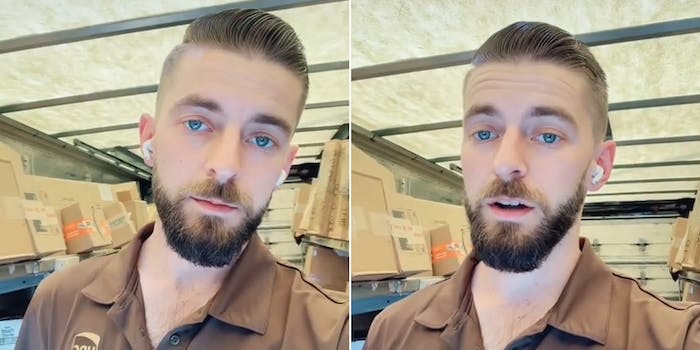 A UPS delivery driver went viral on TikTok after describing the ‘unreasonable’ request by a customer who wanted him to take a couch away—and call Jeff Bezos.

The TikToker, user @your_uncle_dave, posted the video in response to a question from @steveioe: “What is an unreasonable request from someone you were trying to help at your job?”

The driver detailed in the now-deleted video that man once tried to get him to fulfill a ridiculous request: take away a large couch.

“So I knock on [the customer’s] door and say, ‘Hi sir, you have a return item today?’ He points at the couch that he is currently using,” the TikToker explained.

“I said, ‘I can’t take that. It’s not in a box ready to go,'” he continued, noting that the customer insisted he complete the ‘unreasonable request.’

“He becomes angry with me and says that Amazon assured him that I would disassemble and repackage the couch for him,” he said. “To which I responded, ‘Nope, we don’t do that, and we’ve never done that.'”

He also said the man “legitimately expected me to be able to contact the CEO of Amazon and UPS to try to sort this out.”

The TikTok trend of wild customer asks has been going hard. Starbucks baristas have described outlandish drinks orders, including an infamous and time-consuming order with 13 super-sweet ingredients.

The that started the trend is among the best: User him @steveioe acts out an emergency room situation where an avowed “homophone” demanded a woman assist him in checking for testicular cancer.