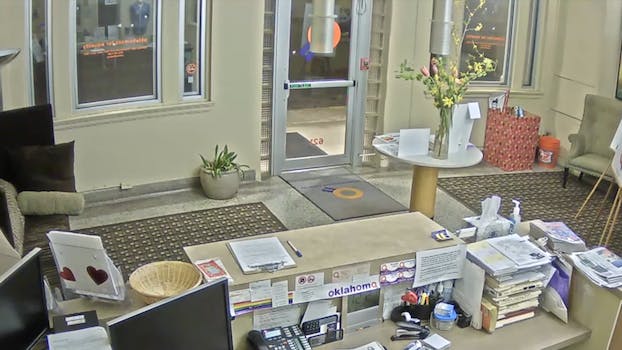 A man later walked into the center yelling he wished everyone was dead.

The attack came at 12:30am Monday morning and was found by the Equality Center’s office administration, Olivia Cotter, at 8:15 am. Video footage uploaded by Oklahomans for Equality shows the truck driving by the Equality Center, with bullet holes sprayed across the protective windows. FOX23 later confirmed that a BB gun was used to damage the front door and windows.

No other identifying information is currently available about the attackers. However, Oklahomans for Equality confirmed that they were “working closely with Tulsa police,” and that “Captain Cathy Reynolds, the LGBTQ liaison with the Tulsa Police Department, has made our safety and security a top priority.”

“I am sickened, yet not surprised, by the bullet holes that now riddle the front of the Dennis R. Neill Equality Center,” Oklahomans for Equality Board President Geoffrey Brewster said in an official report. “They are the latest reminder of the deep-seated hatred some individuals have towards the LGBTQ community.”

LGBTQ Oklahoman activist Sarah M. Bess gave additional context to the news during Monday evening, pointing out that the shooting is not “disconnected” from “the words and actions of our state legislature.”

“Apparently today, after the shooting, someone walked into the gay center yelling hate speech,” she said on Twitter. “People are feeling bold in their hate down here.” FOX23 also confirmed that a man opened the center door and yelled that he wished everyone inside of the center was dead.

The Tulsa Equality Center shooting follows shortly after an Oklahoma anti-LGBTQ Senate bill was introduced in the state legislature. If the measure becomes law, LGBTQ protections across municipalities would be wiped from the state.