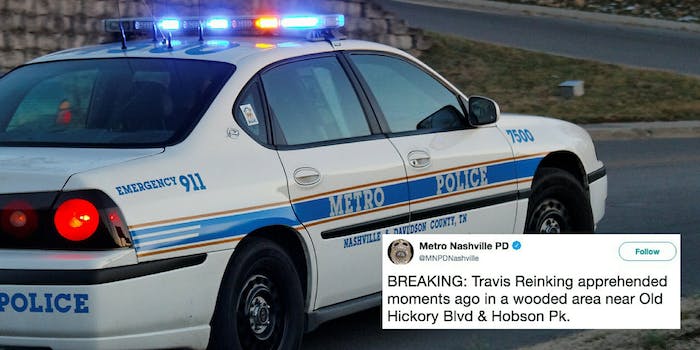 Reinking was apprehended in the woods, according to police.

The Metro Nashville Police Department tweeted on Monday that it had arrested the man suspected of killing four people at a Nashville-area Waffle House.

Travis Reinking, 29, allegedly opened fire the Antioch, Tennessee location on Sunday, shooting two men outside the restaurant before entering the establishment and killing four others. Two others were wounded by Reinking’s AR-15, while another two were also transported to a hospital with injuries resulting from the shooting. Reinking then shed his coat and fled the scene on food, nude.

One of the survivors of the shooting who had been wounded, James Shaw Jr., 29, wrestled the firearm away from Reinking, sustaining burns to his hands and a minor gunshot wound, and saving others.

This laptop bag, empty except for a handwritten ID card bearing the name Travis Reinking, was found by a citizen near the I-24 Old Hickory Blvd interchange. Unknown whether it was discarded before or after the shooting. Reinking is believed to have been in that area Sat. night. pic.twitter.com/yduQlXvAFE

According to the New York Times, about 160 law enforcement officials were involved in the search for Reinking, whose custody was announced shortly after 1p.m. CT. Reinking was apprehended “in a wooded area” in Antioch.

The internet, along with Parkland, Florida, high school shooting survivors, is awaiting a statement from President Donald Trump to denounce Reinking and his apparent targeting of people of color.