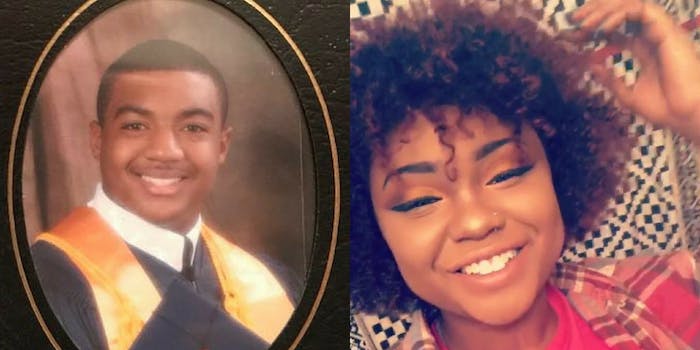 This isn't the first time Trump has kept quiet about the deaths of people of color.

A piece of shit walked into Waffle House today and took the lives of 4 people. One was my sister. I have so much anger in my heart right now. But I want y’all to see the beautiful face of the woman that was taken from us today! Baby girl I love you so much. I’m so sorry pic.twitter.com/1NsDadBc64

All 4 victims of today’s heinous Waffle House attack were young people of color with their whole lives ahead of them.

Law enforcement must view today’s tragedy as a racially motivated hate crime and an act of domestic terrorism. Hate crimes are on the rise. #TravisReinking pic.twitter.com/cJudBRowET

People have also noted President Donald Trump‘s silence on the issue. Since the shooting took place Sunday morning, Trump has yet to release a statement decrying the act of violence, let alone acknowledge the heroism of James Shaw Jr., the Waffle House patron who wrestled the weapon from the shooter and prevented additional fatalities. To critics, much of this silence involves the races of the victims and Shaw as well as the whiteness of the alleged shooter.

Just wondering if trump has congratulated the hero in Nashville that wrestled the rapid firing gun from the shooter and as a result most likely saved many lives?

Donald J Trump STILL hasn’t said ANYTHING about the Waffle House shooting because the shooter is white & the hero is black. If it were the other way around, he’d have been tweeting about it within minutes…no, make that seconds, as his phone is always in his hand.

If a Mexican, a Muslim or an African-American had been arrested and released by the Secret Service and later killed 4 people in Tennessee, Donald Trump would be tweeting about it night and day. His silence on the Waffle House shooting speaks of his racism. https://t.co/YZvJclzs8j

The Waffle House shooter didn’t come from other side of border.

Like many other recent mass shooters, Reinking appears to have also been a supporter of President Trump; he had attempted to get into contact with Trump last summer, going so far as to scale the White House perimeter to meet the president.

Though Reinking’s actions haven’t officially been deemed “racially motivated,” writer and activist Shaun King tweeted that local residents believe the shooter went to that specific Waffle House to target people of color. And much like other acts of violence committed by white men in the time since Trump has taken office, the president has been perceived as being slow to react, let alone condemn, the murders, particularly those of people of color.

Reinking considered himself as a “sovereign citizen,” part of an anti-government group that “believe that even though they physically reside in this country, they are separate or ‘sovereign’ from the United States,” according to the FBI.

Despite the lack of clarity around Reinking’s motivations, the Southern Poverty Law Center (SPLC), which monitors hate organizations nationally, states that the sovereign citizen movement is “rooted in racism and anti-Semitism,” though a majority of members are “unaware” of the origins of the movement. The SPLC states that in the early 1980s, the movement mainly attracted white supremacists and anti-Semites under the premise that Jews were “working behind the scenes to manipulate financial institutions and control the government.”

“Most early sovereigns, and some of those who are still on the scene believed that being white was a prerequisite to becoming a sovereign citizen. They argued that the 14th Amendment to the Constitution, which guaranteed citizenship to African Americans and everyone else born on U.S. soil, also made Black Americans permanently subject to federal and state governments, unlike themselves,” the center stated.

A white man shot and killed 4 POC in a Waffle House and is still on the run but Trump has yet to comment. Before you say “the president doesn’t have to comment on every shooting” imagine what he’d be saying if the shooter were a POC and the victims were white.

Don't forget the waffle house shooter was a Trump admirer.. That Whitehouse intrusion was an attempt to thank Trump for allowing mentally ill keep their AR-15's. He also was by reports associated to RW militia "Republic" groups

After a daylong manhunt, Reinking was arrested on Monday afternoon. Meanwhile, Trump still has not broken his silence, nor has the White House returned the Daily Dot’s request for comment.

“I also want to commend the heroic actions of James Shaw Jr. early Sunday morning at a Waffle House in Tennessee. Mr. Shaw saved lives when he wrestled a gun from an active shooter who had opened fire. The president offers his condolences to the victims and their families. He is monitoring the ongoing situation and the White House is in regular contact with state and local officials.”