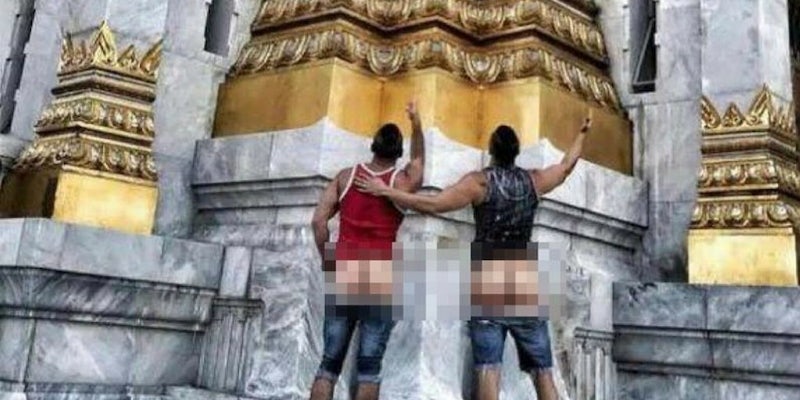 These traveling butts landed themselves in jail.

Sometimes, you shouldn’t do it for the ‘Gram—especially if it means being disrespectful to an ancient culture and getting arrested.

According to the Associated Press, two Americans who run the Instagram account “Traveling Butts” were arrested in Thailand on Tuesday night after posting a photo of themselves exposing their butts at Bangkok’s Wat Arun, a famous Buddhist temple.

Deputy police spokesman Krisana Pattanacharoen told AP that the two men, only identified by their first names, were arrested at the Bangkok airport. Both paid a fine of 5,000 baht, or $150, before being transferred to immigration authorities and face public indecency charges. Police are also considering charging them with Thailand’s computer crimes act, a law often used against the online free speech of political activists.

While AP reported that the “Traveling Butts” Instagram was taken down, an account with the same name is online and has posted 23 photos in the past day—not just of the two men and their bare bottoms, but of other people who took similar photos. However, it’s unclear if these posters are the same men behind the original account.

Sure, mooning the camera at international wonders of the world seems like an interesting concept, but a killer Instagram following is not worth landing your butt in jail.