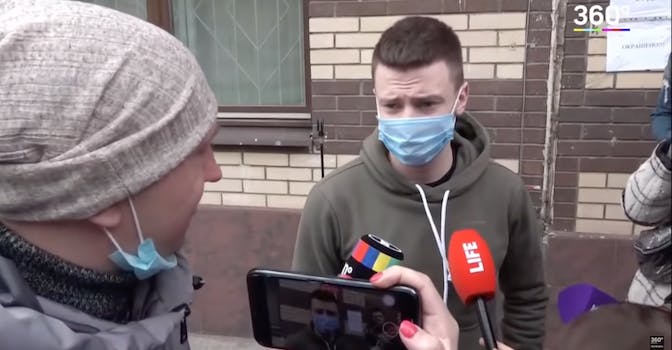 ‘This is too small an amount of money’: Influencer mocks model he abused on ‘trash stream’ as he faces 2 years in jail

The latest in an alarming new online trend.

Andrey Burim, a Belarussian “trash streamer,” is mocking model Alena Efremova over the compensation she’s requested following a “trash stream” which left her mouth bloodied and with other facial injuries.

Trash streaming is part of an alarming trend in Russian online media, wherein a streamer will have a participant do stunts or anything else a viewing audience may want them to do, in exchange for money.

The Sun reports that he went on to mock her claims of abuse during the trash stream, and said her concussion was fake. Burim also reportedly mocked prosecutors over their possible questions.

Efremova said online that she suffered severe injuries on his stream, and that the experience has traumatized her, the Sun reports. She had her head smashed into a desk, according to the Daily Mail.

“Mellstroy beat me up last night and publicly humiliated me in his stream,” Efrenova wrote. “I just want him to be punished for this so it will not happen to any [other] person. I am deeply distressed, my limbs are shaking, my head is splitting with any movement. Not a single normal person who respects themselves will remain in his audience.”

Previously, the Daily Dot reported trash streams have resulted in the death of 60-year-old Yuri “Grandfather” Dushechkin after he drank 1.5 liters of vodka on a stream and Valentina “Valya” Grigoryeva who died from head trauma.

These deaths have caused Russian lawmaker Aleksey Pushkov to call for legal punishments for trash streams. He wants six years in jail and punitive fines for the worst cases.

“This is becoming more and more widespread, so it is necessary to legislatively respond to this form of activity,” he said, as reported by the Sun, “Naturally, if we are talking about direct participation or complicity in murder, then the imprisonment term may be longer.”