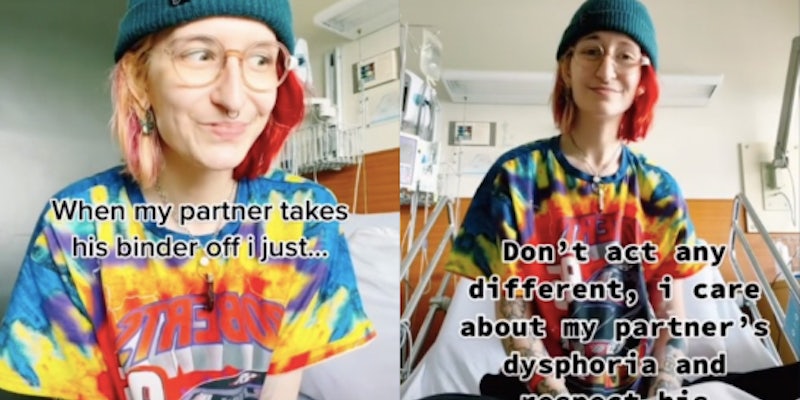 ‘Be better’: Transphobic TikTok trend about binders faces a slew of callout videos

TikTokers are coming together to call out a transphobic trend about binders.

TikTokers are coming together to call out a transphobic trend about binders, a clothing item that one wears to diminish the appearance of their chest.

The trend, which is set to a sped up version of “Rodeo” by City Girls, consists of a TikToker acting out looking at their partner’s chest after they take their binder off—the implication being that once the binder is removed, their partner’s breasts are visible.

In his video participating in the trend, @thesonicirl’s jaw drops “when [his] boyfriend takes off his binder].” Another TikToker’s reaction is similar in their take on the trend where the user looks downward and their eyes widen.

While some that made trend videos provided explanations in their TikTok’s comments sections that their partners consented to their actions, that didn’t stop dozens of TikTokers from making PSA videos about the trend itself.

If people who wear binders tell their partners that looking at their chest when they’ve taken their binder off is okay, TikTok call outs of a trend shouldn’t police the inner workings of a relationship between people IRL.

But the heart of this trend—the idea that what’s under a binder is something more desirable and taboo—could be misguiding to people who have a limited and/or bigoted understanding of trans and gender non-conforming people. TikToker @chronicles_of_kade put it best: The trend “just shows you don’t see your partner,” or any trans person watching the video, “for who they are.”

It’s similar to how the trope of “a man in a dress” (think, Mrs. Doubtfire or Tootsie) is harmful to people’s perception of transwomen: Focusing on someone’s breasts under their binder discreetly furthers the idea that anyone who wears a binder is actually “a woman wearing a binder,” thus undermining their trans and/or non-binary identity.

Other trans TikTokers weighed in on the harmfulness in the trend as well. TikToker @fonkynuts, who is genderqueer, said that their ex “used to love what was underneath their binder,” and that they felt disrespected and disgusted.

“Be better,” @fonkynuts advised viewers in their TikTok. Similarly, trans TikToker @softmusicqanddrain asked viewers to “respect [trans peoples’] bodies” when they take off their binders.

And TikToker @abord. me shared what they do when their partner takes off his binder in the TikToker’s presence: “don’t act any different.”

“I care about my partner’s dysphoria and respect his identity,” they wrote in the overlay text of their TikTok.