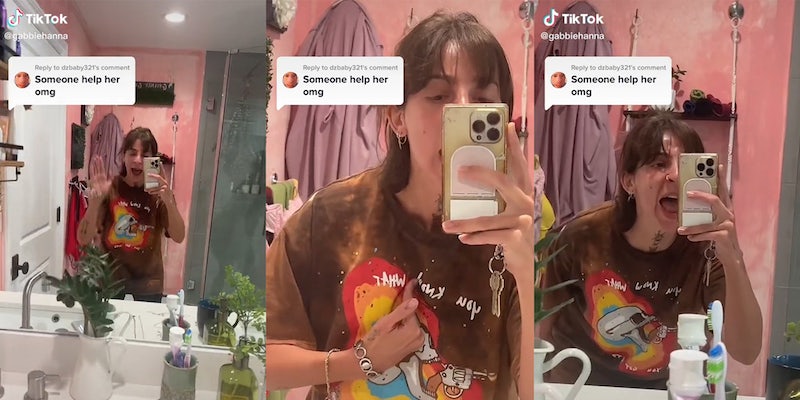 Some TikTokers have expressed that using the sound is at Hanna’s expense.

Gabbie Hanna sent shockwaves through TikTok when she documented a manic episode she was experiencing in late August. Many of the statements Hanna, who is bipolar, made in her videos became viral TikTok sounds shortly after they were posted—and some TikTokers think that using Hanna’s cries for help as audios for videos undermines the severity of mental illness.

As reported by the Daily Dot’s Michelle Jaworski, Hanna, a former Vine star and TikTok creator, posted around 100 TikTok videos in a 24 hour period on August 24. In the videos, Hanna made racist, transphobic, and other offensive statements and also made declarations that raised concern for her well-being, like how she’s the “second coming of Jesus Christ” and that she’s “beat” mental illness.

She’s since deleted a majority of her videos posted during that time period, and said that she was experiencing a manic episode. One video that remains, though, has turned into a viral TikTok sound.

The video is of Hanna screaming “help me” over and over again. As TikTokers are apt to do, they are using Hanna’s voice in videos to make jokes about not coming to the aid of those in need for comedic reasons. Almost 13,000 videos use the original sound.

“POV: You’re bleeding out but my bluetooth has to connect before we can go to the hospital,” a TikTok from @h0enathann jokes.

However, some TikTokers have expressed that using the sound is at Hanna’s expense.

“It feels wrong to use [the sound] because she’s clearly going through a mental health crisis,” TikToker @wannabescaryspice wrote in a TikTok using Hanna’s sound.

Lucy Kloc, who posts TikToks about her life, fashion, and beauty, also posted a TikTok saying that Hanna’s sound shouldn’t be used for “little TikTok jokes.” In an interview with the Daily Dot, Kloc said she thinks Hanna should be treated with compassion.

“I feel as though [Hanna needs] to be met with compassion,” Kloc told the Daily Dot. “Instead of taking their TikToks made during a mental health crisis and turning them into a ‘trend’ to make jokes.”

And Kloc said that compassion should be extended to Hanna even though she doesn’t support the statements the former Vine star made in her videos.

“It’s unfair to pick and choose who is met with compassion during a mental health crisis and who is turned into a joke,” Kloc said.

Concern for Hanna’s mental health does not absolve her of what she said. Additionally, Hanna’s display of mania is specific to her.

Symptoms of bipolar, or any other mental illness, are unique to each person—generalizing about what mania looks or sounds like increases stigma surrounding mental illnesses.