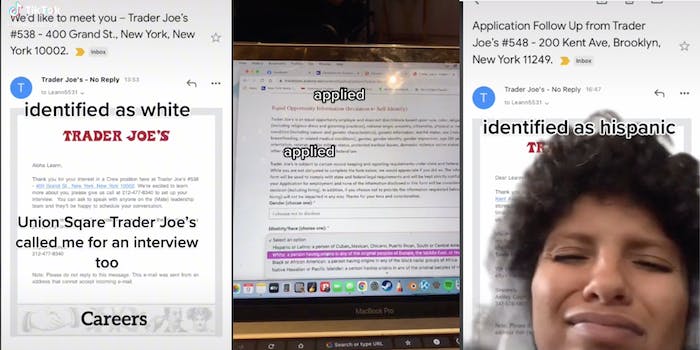 ‘I wonder why they want to meet me now’: Hispanic TikToker only secured interviews at Trader Joe’s when she applied as a white person, viral TikTok shows (updated)

'My experience is there. What’s the problem?'

A series of videos follows a TikToker as she applies to multiple Trader Joe’s locations in New York City. After failing to get even an interview, the TikToker started putting her race as white on the application.

In an earlier video, on Oct 9., @suwusubaru contemplates lying and saying she’s white for a job with the caption, “my experience is there. What’s the problem?”

In a subsequent video, she actually does it and gets an interview. “i wonder why they want to meet me now,” @suwusubaru states in the caption.

@suwusubaru explains in a follow-up TikTok that after getting rejected from multiple Trader Joe’s locations as Hispanic, she reapplied to those locations as white and got interviews.

“I don’t know what it means but do what you will with that information because that doesn’t look good,” she states.

The Daily Dot has reached out to Trader Joe’s representatives through email.

Update 2:11pm CT Oct. 19: When reached for comment, @suwusubaru told the Daily Dot she has been in contact with the regional vice president of the New York City Trader Joe’s locations.

“The fact that I had to alter my resume to sort of prove [a] point about systemic racism in the workplace, I understand it’s not the manager’s faults, it’s the system…the system is going to continue to filter people in and out for jobs, it’s the way it was designed and it’s going to stay that way until further notice,” she said.