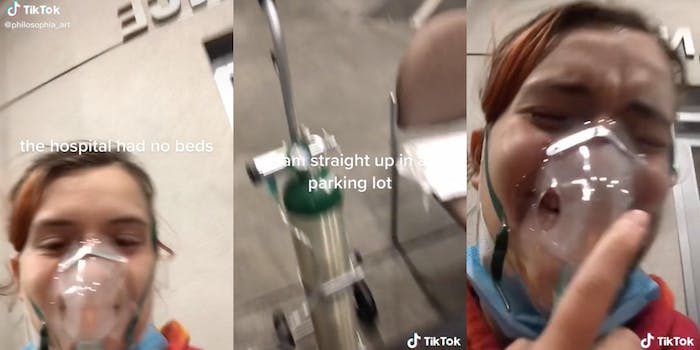 The fully-vaxxed 23-year-old was suffering from a severe asthma attack.

A viral video shows a TikToker getting treatment outside of a California hospital for a severe asthma attack. She says there was no room for her to receive treatment inside the hospital, which was apparently overrun with COVID patients.

Twenty-three-year-old multimedia artist Sophia Santana (@philosophia_art) posted a video of herself sitting outside a hospital, taking in oxygen. The caption says: “Get ya vaccines people.”

As she scans the empty area and laughs at her predicament, the overlay text reads: “The hospital has no beds. I am straight up in a parking lot.”

Santana wrote in the comments: “PSA I went to the hospital cuz I had severe asthma attack not covid!!”

The video has garnered over 500,000 likes and 3.2 million views since it was posted on Thursday.

Santana also stated, replying to some critical comments, that she was “fully vaxxed and have been since May so no need for the shade lol.” A CDC study reportedly found, looking at data from Los Angeles County residents, that unvaccinated people were over 29 times more likely to be hospitalized by COVID than vaccinated people.

In a subsequent video, Santana takes aim at people who accused her of staging the video and predicament. She says she was at the hospital “for a day” and shows some of her hospital paperwork, which features severe asthma attack symptoms.

“As my fellow asthmatics would know, if you’re at that point, you really need to go to the hospital because people can die from asthma,” Santana says. “It’s not cool.”

She later says she came in alone and wound up “gasping for air for several hours,” waiting for some to attend to her. She says that at one point, she was “on all fours” and “freaking out.” She says she was eventually “wheeled out to the ambulance bed” and told by a nurse that she was “on camera, so flap your arms around if you need help.”

But once she was out there, she says “random hospital staff would come out and be like, ‘What are you doing?'”

The artist said that she’s “fine and fortunate” and that she thought the situation “was funny.”

The Daily Dot has reached out to Santana for further comment.