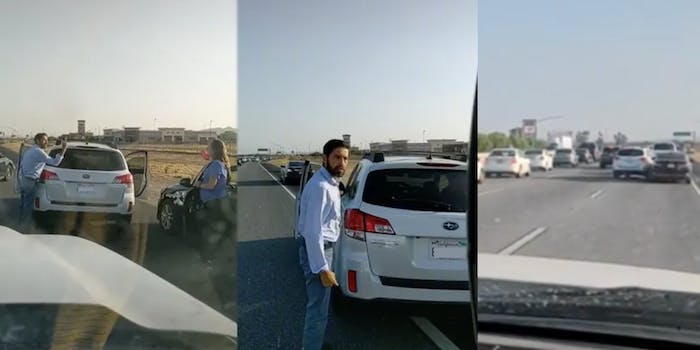 ‘I got it on camera’: TikToker accuses man of purposely hitting a woman’s car in viral video

'Thank you for stopping and being a witness.'

A man in Perris, California allegedly crashed into a woman’s car and tried to blame her for the accident, according to a TikToker who caught the altercation on camera.

The TikToker, known as @Phototiztik, shared a video clip of the man outside his vehicle on the freeway, yelling at the woman as she got out of her vehicle. The man can be heard saying, “You just hit my car, bitch.”

But the TikToker told the man, “I saw you, I got it on camera. You just hit her car.”

The man appears to become weary and retreat back to the driver side of his car. The woman he hit can be heard saying she’s calling the police.

Another video clip from the TikToker shows the moment before, when the man appears to side swipe the woman’s car, pushing her into the highway shoulder. Using the text-to-speech function, the TikToker claims, “I can’t believe this guy just hit that lady on purpose.”

Although it’s unclear from the video footage whether the crash was intentional or purely accidental, the TikToker and several viewers believed it was an insurance scam.

“Thank you for stopping and being a witness. Insurance fraud is no joke,”  one viewer commented. According to the TikToker, this issue has recently become a big deal in Southern California.

The Los Angeles Daily News reported that three men accused of staging 15 accidents on freeways to bill insurance companies were charged the week of Sept. 4. The allegedly staged accidents left 21 people injured from January to September 2020. Alex Karkanen, assistant head deputy for the District Attorney’s Automobile Insurance Fraud Division, told the outlet that staged accidents happen fairly often, but it’s unusual for this to happen on the freeway.

It’s unclear if this incident recorded on TikTok is related to the recent staged accidents. The Daily Dot reached out to the TikToker and the California Highway Patrol for comment.