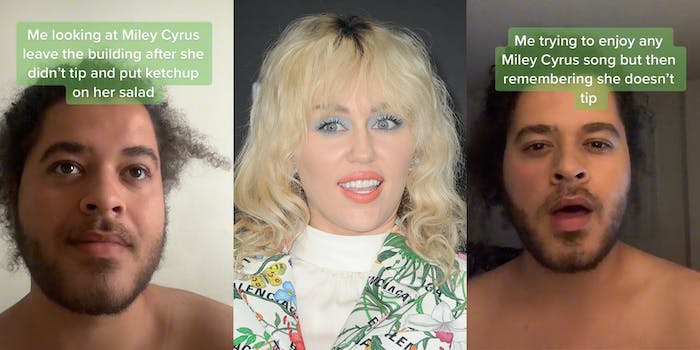 He says he also saw her put ketchup on her salad.

A TikToker alleged in a series of videos posted to the platform that Miley Cyrus didn’t tip him and once ate her salad with ketchup at a restaurant.

Jona Ford’s (@jonaford) first video on the subject was simple. “Me trying to enjoy any Miley Cyrus song but then remembering she doesn’t tip,” Ford wrote via text overlay on the video. The video racked up nearly 50,000 views in two days.

Ford previously shared this same accusation in 2020 in another viral TikTok.

Sharing this claim again set off an uproar, with some chiming in to counter Ford’s accusation.

“She came to my job in nyc and tipped BEYOND generously (300%),” one user wrote. “What happened at your restaurant?”

Ford responded to this by saying Miley was a regular and consistently failed to tip. He later added that this occurred in 2019.

“Not true!” another said. “She came into a bar i was working at. i wasn’t her server but she gave the girl who waited on her like 200$ for 2 shots of tequila.”

While Ford didn’t seem to doubt these other claims, he reiterated that he could only speak from his own experience.

He added to this claim in another TikTok posted on Wednesday. “Me looking at Miley Cyrus leave the building after she didn’t tip and put ketchup on her salad,” he wrote via text overlay on his latest video regarding Cyrus. He said in the caption that posting about Cyrus seems to boost his engagement.

Ford told the Daily Dot that Cyrus never tipped at the restaurant he worked in, though he did know of people who had been tipped by her.

“I have met others from more expensive/trendy restaurants where she did [tip],” he said.

Despite allegedly not tipping, he said that she was always a pleasant patron.

“She is really sweet and makes sure to say please and thank you,” Ford detailed. “And she makes sure to not leave a mess at the table.”

His two videos in tandem set off waves of accusations against other celebrities who are alleged to not tip. The more peculiar claim in Ford’s videos, however, is the allegation that Miley eats salad with ketchup.

Jona isn’t sure whether it was intentional or accidental.

“I think it was an accident. She very quickly switched to hot sauce. It was a chicken fajita salad,” he explained. “She didn’t scrape it off or accept a new salad though, either.”

There is some evidence that suggests she might just be that much of a ketchup fan.

Way back in 2010, Miley revealed on The Tonight Show with Jay Leno that she loves ketchup. She loves it so much, in fact, that she would occasionally drink it straight from the bottle.

While this doesn’t prove that she eats the condiment with everything, her sister Noah did post a picture of Miley eating a salad with ketchup nearby in 2015. Braison Cyrus, Miley’s brother, also at one point posted an Instagram story featuring an adult Miley still drinking ketchup straight out of the bottle.

No matter the reality behind Miley’s alleged ketchup-salad habits, or whether or not she tips, users agreed that tipping is an absolute necessity when dining out. “If the person is rich and doesn’t tip, shame them,” one TikToker said in response to the allegations.

The Daily Dot has reached out to Cyrus’ team.