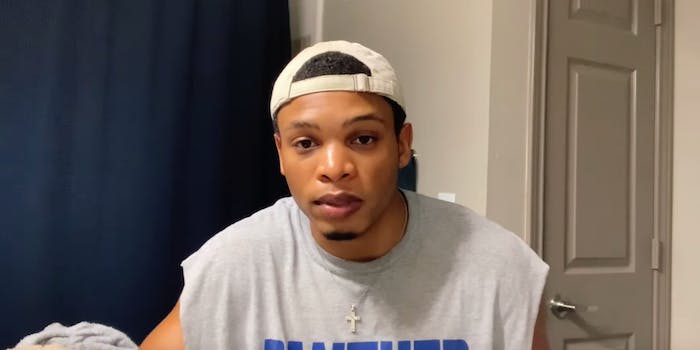 Anonymous account @emoblackthot had become a staple of the Black Twitter community. Many believed the account was being run by a Black woman, some even thinking it was secretly being run by Rihanna. But the person behind the account has come forward with an even more shocking revelation than having a celebrity identity: The account is being run by a man.

In a lengthy Paper profile, 23-year-old Isaiah Hickland came forward to reveal that he was the person behind emoblackthot.

“Hickland’s also had to deal with his fair share of negativity,” Paper writes. “From all the stories and anecdotes he tells, it’s evident that things haven’t been easy for him, especially as someone seemingly so sensitive, so emotional, so self-aware. Because while he may be Twitter’s go-to for everything from hydration reminders to the newest in rising creative talent, the one thing he’s never been able to feel internally reconciled with is the feeling that his brand of ‘authenticity’ is consistently undermined by the secrets he has.”

The profile was published with a link to a YouTube video, titled “The Reveal / My Story,” which was posted by Hickland himself. In the 20-minute long video, Hickland explains how emoblackthot materialized and  admitted that he was “the face behind this entity.”

“It was kinda time to be honest, take off the mask,” he says. “Take account for hiding behind an anonymous facade and move forward with my life.”

People, especially among Black Twitter, are now speaking out against Paper and Hickland. “I don’t understand how someone creates an entire online persona, lies about it, says they lied, then gets a glowing profile story. We are in the end of times,” activist DeRay Mckesson tweeted.

I don’t understand how someone creates an entire online persona, lies about it, says they lied, then gets a glowing profile story. We are in the end of times.

the emoblackthot account being run by a man pretending to be a black woman doesn’t sit right with me. while i get that you’d want to hide behind a screen, it could have easily been done without assimilating our struggles and gaining our trust under the guise of black sisterhood.

In the video, Hickland says he hopes the fans he garnered from the account would continue to support him, but if they didn’t, he would “get why.”

He says that he created the account four years ago when he was a student at Texas State University, where the environment was “political, racially charged division at the school,” riddled with white supremacist fliers and speakers.

He says he was involved with student organizations and unable to share political opinions as he “was representing the school.” So he made the account to do just that, as well as  “boost artists [he] believed it.”

“Didn’t want to bring attention to myself … so I made up a fake name,” he says, referring to Nicole, the name of the Black woman many believed was running emoblackthot. “Nicole” would remind followers to stay hydrated and complain about menstrual cramps.

And therein lies the problem. People in the Black community, especially women, are perturbed that Hickland posed as a Black woman for attention, while many Black women organizers and activists remain neglected. Hickman hasn’t endured the same challenges Black women constantly face but has co-opted their identity.

“You used a Black woman caricature to rise up and now are disposing of it. You didn’t have to do all of this…would people really have guessed it was you if you just said you were a man. I’m so tired of everyone BUT Black women getting praise for our image. It’s disgusting,” one YouTube commenter wrote.

you came for madlatinathot and waterdrinkingbot saying that they were biting off a BLACK WOMAN, knowing we would cap for you. How come youre the only one who can profit off being a BW?

social media isn’t just a passive forum here and i can see that being the default thinking. but both social media & tech more broadly are (re)shaping race and so they need to be addressed as active facilitators re; misogynoir & its dehumanization, at the very least.

Too many folks don’t give a shit about protecting Black women but always want to emulate us, profit from us, bash us, and lie on us.

So you telling me that people who aren't black women get to have a successful platform by pretending to be black women????

But black women don't get shit besides of being taken advantage of???

Many feel betrayed by emoblackthot for sharing their vulnerabilities with who they thought was a Black woman, contradicting Hickman’s comments.

“People would DM me and try to get to know me and I wouldn’t respond, I wouldn’t feed into it at all,” Hickman says.

I have to say. I loved the emoblackthot account so much. So this feels like a huge slap in the face. You solicited money under the guise of a Black woman in need of help, you pretended to confide in Black womens’ issues, when all along you were an attractive, able bodied cis man?

Still kinda disturbed by the fact that emoblackthot acted as a BW all this time making so many people trust him and open up to him like i see so many people that he was close to hurt and its just…. disgusting i just dont get why he lied all this time. Thats SO fucked up

Many asked Hickman what he did with all the money he raised under the guise of Nicole.

“This is why you didn’t want to be interviewed on the phone because you didn’t want me to know that you are a man. I cannot. People, including myself, sent you money, thinking you were a Black woman…trying to support you and lift you up and it’s all bullshit,” writer @kelleent tweeted.

This is why you didn’t want to be interviewed on the phone because you didn’t want me to know that you are a man. I cannot. People, including myself, sent you money, thinking you were a Black woman…trying to support you and lift you up and it’s all bullshit.

emoblackthot walkin away with money after pretending to have periods pic.twitter.com/EOnXx0MFdD

Some suggested Hickland only revealed his true identity to gain the clout from the account, not because he felt bad.

“The worst part is that after emoblackthot pretended to be a black woman and gained fame off being relatable [to other black women], he revealed himself only because he wants that fame to his name and face. This reveal wasn’t genuine or out of a guilty conscience,” Twitter user @cIearitout wrote.

In the video, Hickman says he is taking a social media break until Sunday.