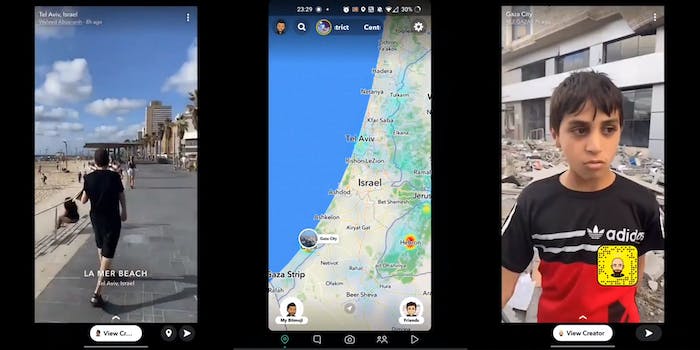 ‘The difference says it all’: TikTokers react to stark contrast of social media photos in Israel vs. Palestine

'Go to Snap map and see for yourself.'

A screen recording taken from Snapchat’s world map and reposted to Twitter and Reddit shows stories and images taken from Israel and Palestine amid violence in Gaza in the last week.

Posted on the r/PublicFreakout subreddit, the video is just over a minute long and shows a glimpse of life in Tel Aviv. People share videos from a night out, at the beach, and at brunch. The bustling financial center in Israel is pictured as peaceful in residents’ sunny pictures of daily life.

The video shows public Snapchat stories posted from Gaza City in the Gaza Strip of Palestine. One clip shows a young boy surrounded by rumble on the street, the aftermath of an airstrike.

In the next clip, a building in the distance is on fire and smoking heavily after it was hit by an Israeli airstrike. The contrast between the videos and images in each city is startling.

Similar videos were also shared to Twitter from TikTok as creators reacted to the content from both of the cities.

“Idk if I was shocked but… the differences are STARK,” user @obeysyed, who goes by Suede, tweeted after creating a TikTok showing himself react to the Snapchat map.

In the video, Suede faces the camera directly as he scrolls to Tel Aviv on Snapchat’s world map feature and watches the public stories from the city.

“Somebody said if you really wanna know the differences of what’s going on to go to snap map and see for yourself,” the TikTok says.

The video was posted to Twitter on Monday and has over 2.6 million views, 99,700 retweets, and 156,300 likes. Many users said they found the visual contrast hard to believe.

“And yet, Israel is constantly playing the victim card. The AUDACITY,” one user tweeted.

For others, the video sparked a bigger conversation about where the violence will extend next. Some speculated it is only a matter of time before the U.S. government gets involved.

“Don’t worry guys our country will justify going to war over this soon,” another user wrote.