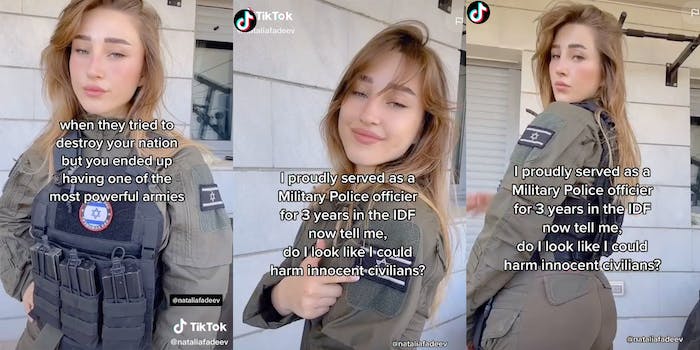 People are torn over this enthusiastic, dancing Israeli soldier on TikTok

The videos have received praise, scorn

A series of TikToks from the past week is receiving both praise and scorn, as a former soldier with Israel Defense Forces (IDF) unabashedly stood up for the Israeli army in response to Hamas’ attack this week.

The videos include her dancing in uniform in support of her country and accusing Palestinians of faking funerals.

The TikToks, uploaded by Natalia Fadeev (@nataliafadeev), addressed the violence between Israel and Hamas, with Fadeev showing her support for the IDF while in uniform.

“When they tried to destroy your nation but you ended up having one of the most powerful armies,” one TikTok reads.

In one video, which received over 855,000 views and 70,600 likes, Fadeev can be seen dancing in the background dressed in full uniform.

Despite President Joe Biden stating he would support a ceasefire in the area, the violence continues to escalate between Hamas and Israel. During the past week, Hamas launched around 3,440 rockets from Gaza to Israel, killing at least 12 people, according to NBC News. Numerous Palestinians have also been killed by Israeli airstrikes.

“Many have already tried, so your rocks don’t scare us #standwithisrael #idf #israel,” Fadeev wrote.

Users on TikTok filled the comments section with support for Israel from around the world.

“I love how so many people here think Israel is weak. You don’t mess with God’s people. Love and support from South Africa,” one user wrote.

But others found the videos offensive.

“If rocks dont scare u then why reply with guns and grenades,” wrote one.

Heated discussions broke out in the comments of all her videos about her looks helping to wash over the fact that the IDF is responsible for the lives of Palestinians who died in the West Bank this week.

Others took the opportunity to defend her, calling out the comments as uninformed on the conflict, which spans generations.

“These comments really think they understand 100’s of years of history/conflict because they check Instagram everyday,” one user wrote.

Fadeev did not immediately respond to the Daily Dot’s request for comment.