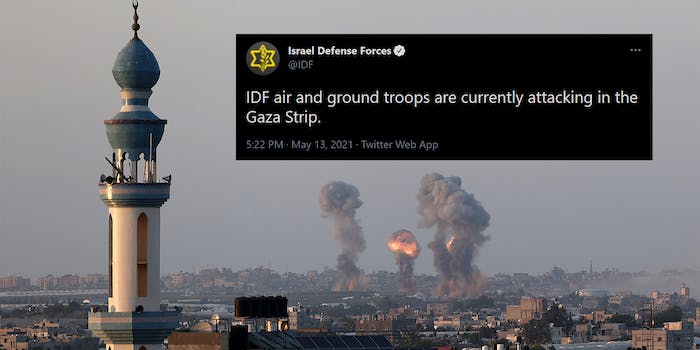 People aren't pleased with the updates.

The Twitter account for the Israel Defense Force is keeping the world updated on the ongoing conflict in Gaza by live-tweeting airstrikes and bombings.

And people online are upset with the IDF’s live updates on the conflict in the Gaza Strip, actions that probably don’t belong on Twitter.

“A Hamas terror squad was about to launch more rockets from Gaza into Israel. We stopped them before they could,” the IDF tweeted, with a video of an airstrike.

“Sirens sounding in the city of Beersheba,” it tweeted today.

Right now, the world is watching Israel launch counterattacks into the Gaza Strip after a week of violence from both sides.

The fighting began on Monday when militant group Hamas said it would send missiles into the country if Israeli settlers did not leave East Jerusalem, where Palestinians have been fighting to live for decades.

Also this week, Israeli forces blocked Palestinians from celebrating Ramadan in holy regions of the city.

Five days of airstrikes and protests have left many dead, primarily on the Palestinian side.

Regardless, people on Twitter don’t appreciate the onset of a war being updated online.