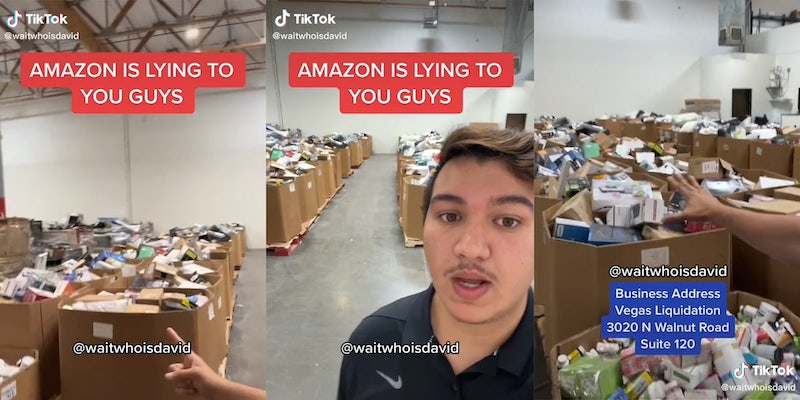 A TikToker reveals what allegedly happens to many returned Amazon items: they end up being sold in pallets at liquidation warehouses across the United States rather than back on shelves. According to the creator, anyone can actually check out these warehouses and buy the items at a steep discount.

David Guzman (@waitwhoisdavid) posted the TikTok on Friday. In the clip, he’s at Vegas Liquidation at 3020 North Walnut Road, Suite 120, in Las Vegas. “Amazon is lying to you guys,” he says.

He continues, “Everything that you actually send back to them ends up in these return warehouse liquidation pallets. Anybody can buy pallets full of thousands of dollars worth of returns in each pallet for only a couple hundred dollars, and most people do not know about it.”

In a later TikTok, Guzman pans the camera in on a pallet box full of marked-down beauty supplies. He says, “My girlfriend has been telling me that she’s been wanting this specific makeup pallet or something. I don’t know what she said so I found this place online that sells makeup pallets. It’s a full pallet box of makeup, I’m going to buy it for her, it’s only $600. I hope she likes it. It’s a lot.”

According to his TikTok profile, people can buy more than just beauty supplies in these return warehouses: electronics, bedding, shoes, and more can be found there.

According to Guzman, other retailers like Walmart and Home Depot do the same thing, selling returned items at discounted prices at liquidation warehouses.

TikTokers were surprised such a thing existed.

“I want to buy one,” commented another.

As some people pointed out, not all items will be in top-notch condition: “Ok but why spend money on returns that are mostly damaged or used or unsanitary. a coworker of mine purchased a mystery box n everything was damaged.”

The Daily Dot has reached out to Guzman via Instagram direct message and Amazon via press email for comment on this story.