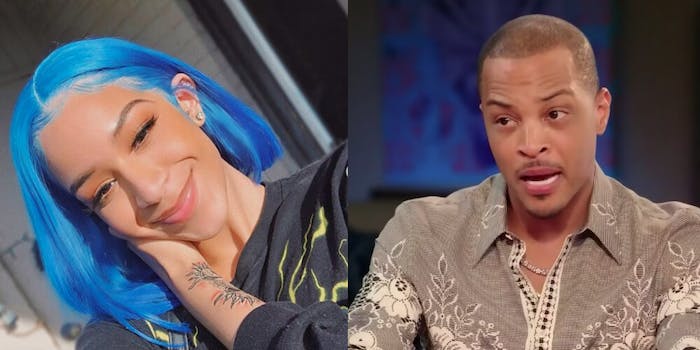 T.I.’s daughter–Deyjah Harris–is back on Instagram after a two-month hiatus, following the “hymen check” controversy.

She published two new posts for her 1.5 million followers: a video showing off her new ink and a photo rocking an electric blue wig.

“I’m ready for my next tattoo already,” Harris wrote, along with a shoutout to her tattoo artist. “If you’re ever looking for a bomb tattoo artist in ATL, hit up @beyond_artistic and tell him i sent you!”

Harris made her exit from Instagram after her father sparked controversy for admitting that he takes her to the gynecologist yearly to check her hymen. T.I. seemingly believes that an “intact” hymen is proof of virginity (it is not).

On a November episode of the Ladies Like Us podcast, T.I. described taking his daughter to a gynecologist the day after her birthday parties to make sure she was still a virgin.

“Usually like the day after the party, she’s enjoying her gifts, I put a sticky note on the door: ‘Gyno. Tomorrow. 9:30,” the rapper said. “As of her 18th birthday, her hymen is still intact.”

His comments were met with immediate backlash and outcry, with celebrities, activists, doctors, and even organizations denouncing T.I.’s stringent policing of his daughter’s sexuality and promotion of hymen checks. It even prompted the state of New York to consider banning the practice.

“This makes me feel physically ill,” Handmaid’s Tale star Madeline Brewer tweeted in response to the comments. “It’s abhorrent. This isn’t behavior to laugh at or joke about. The level of toxicity and malice and control he’s exerting on his own daughter’s life and bodily autonomy and privacy. I’m sick.”

This makes me feel physically ill. It’s abhorrent. This isn’t behavior to laugh at or joke about. The level of toxicity and malice and control he’s exerting on his own daughters life and bodily autonomy and and privacy. I’m sick https://t.co/x3L8q38VWg

Planned Parenthood blasted the rapper on Twitter with an indirect jab.

“Idk who needs to hear this but virginity is a made-up social construct, and it has absolutely nothing to do with your hymen,” the organization wrote at the time.

Idk who needs to hear this but virginity is a made-up social construct, and it has absolutely nothing to do with your hymen.

T.I. tried his best to do damage control by appearing on Jada Pinkett Smith’s Red Table Talk Facebook show to discuss his comments. The rapper said he apologized to his daughter and had no idea “how serious and personal it was until after he said it.”

Deyjah Harris has yet to publicly address the controversy.